'According to me, everyone is a visionary', says BJP's Richard

When we last met Richard, he was busy with his latest Fashion event that is set to be launched in Trivandrum the next month. Richard had always been carrying the right attitude while interacting with people , be it from any field and has always stood for equality and to being down to earth. He had always marked is views and comments on politics and had been an active social reformer and thinker. All his shows highlight the value of Child Education and women empowerment.
The recent news that Richard joins Bharatiya Janatha Pary was a shock to many. This was not because of being sceptical about his skills but about the taboo associated with the party that the party encourages only the Upper class Hindus, when Richard himself is from a minority community.
Here is what he has to tell about his entry into active politics.

*Richard has been well known in Fashion and Entertainment Industry. It means that you are well informed and knowledgeable about the happenings around the society. So, what makes you join politics?

As you have mentioned, being informed about the happenings around our society is the most important thing as an individual. Me being part of BJP is to build a bigger platform to being a part of revolution. I was never part of any political party. It took me time and pain at the same time to understand the emotions of people around me and their rights. Rights- I talk about it everytime. We being Citizens of India should be aware of the rights we enjoy. Most of us have felt being ignored when we raise our voice for our rights. “Be you be the change you want to see in this World” is just not a simple saying. It has been proved by the present Central rule and it should be an eye-opener to all.

*You have rendered great helping hands during the Kerala floods, many of which you did it without publicizing… So do you now think the works that you do need proper backing?

There are many people who have contributed to the earlier and recent floods that hit Kerala. Its heart wrenching to see many families losing their loved ones. The unity of people when in need is extremely energizing to witness. We always wished for the good and has contributed in terms of service, goods & money. Publicizing what we contribute has many intentions. It can be monetary benefits or publicity. Lately, a person was being publicized for contributing dresses to the people affected in the northern part of Kerala. There are many who have done much more than what that Individual has done which has gone unnoticed. Accountability for helping in time cannot be and should never be measured and publicized..

*You were always been known for being a visionary personality. What do u think how things in India, Kerala will change in a year or two.

I strongly believe that Everyone has a vision. It is just that many of us donot recognise and work for it. My motivation is our respected Prime Minister Shri Narendra Modi a man with amazing power and courage to take the right action. Our PM has proved how a normal person can transform the worlds’ biggest democracy. India has always been a developing country but I am sure situations right now would take India to being a fully developed country.

Kerala Gods Own Country which has always been a favourite place for many people around the world and much forward in terms of education and tourism has already made its destiny to being an amazing place for people who wants feel home away from home.

I don’t want to discuss the present political scenarios in Kerala right now as I think we have still time and people will realise what a proper governance should be like. 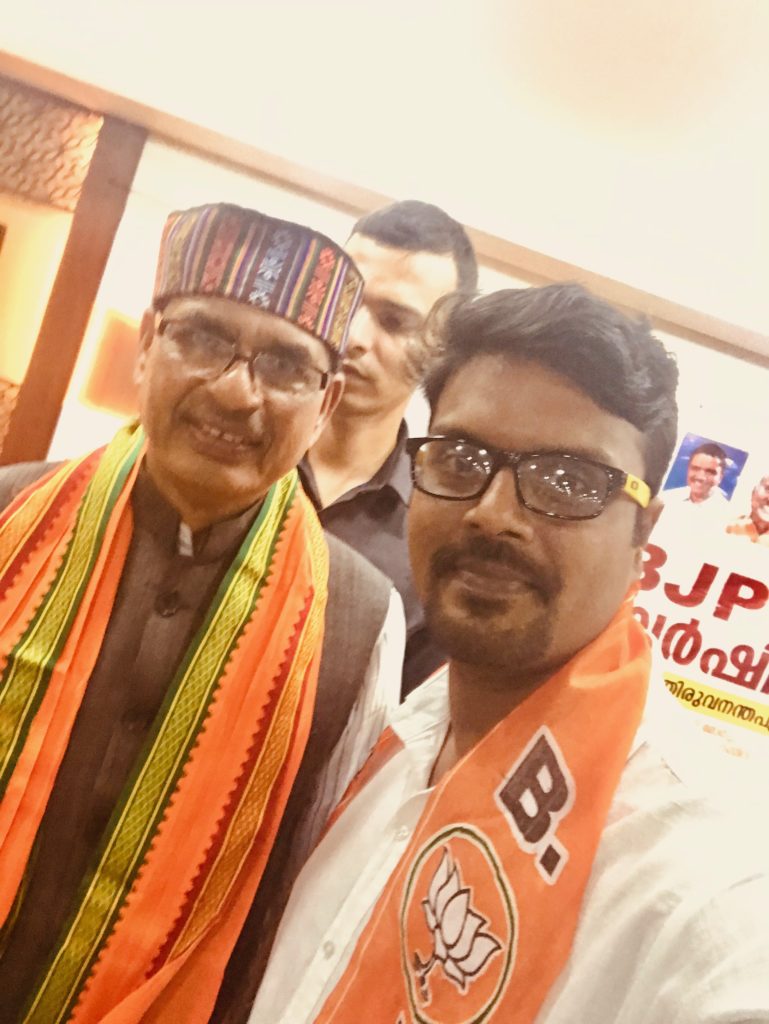 *Mr.Modi had been a man who had been applauded and criticized the most. As being BJP’s young member, and a genuine leader who has been working for the betterment of people around you, what is your genuine response to the people’s take on him?

Prime Minister Modi has always made his statements clear during many talks throughout the country. He never stood for questions to be asked. He has always made people understand that he is also a common man and he has spread a strong message to the people of India that change is born.

Average Minds Discuss Events (Hartals that we face in Kerala)

Criticisms are part and parcel of any person who wants to bring in a change for the betterment of a nation and its people. I feel being a visionary person Mr Modi is least bothered about criticisms and nobody can ever stop him from reaching his destination. I feel that every Indian should visit the website www.bjp.org and understand the philosophy of the party and what’s the constitution states in its document and the changes we all see is only been executed in time.

Much talked about Article 370 been Revoked I was happy to highlight RTE ( Right To Education ) where kids can now enjoy the benefits of RTE. This is what we are talking about right governance and right action without any discussion with local bodies or other political parties is the right move to bring a change to this country and people have welcomed this decision considering many factors of developments that is yet to commence in J & K.

The government has always stood for the development and the betterment of the nation and its people. Let’s be part of a movement that encourages development. Jai Hind