Dr Ajay Sekher.
The recent archeological excavations in Pattanam in Kerala and Kizhadi near Madurai in Tamil Nadu have revealed the extensive cultural presence of Buddhist missionaries in Kerala and Tamilakam. The abundance of the black and red ware or Indian roulette ware introduced in South India by these monks and nuns with the Brahmi script graffiti “Amana” on them testify the prolonged presence of Buddhism. It was the missionaries of Asoka who introduced the Dhamma or ethics along with the Brahmi script in South India way back in BC 3rd century. Accroding to historians Brahmanic Hindu religion was established only in AD 8th century in South India and Kerala in particular. Srimulavasam now known as Trikunnapuzha, Potiyil Malai now known as Agatiyarkudam and Sabarimalai were great Buddhist centres in Kerala. Ayyappa or Dharmasasta is a synonym for the Buddha. Many ancient texts of Buddhism like Manjusri Mulakalpam were recovered from Kerala. Kerala and its Buddhist people are mentioned in Asoka’s rock edicts as “Kera Puto.”
The Buddha idols recovered at Mavelikara, Kayamkulam and Karumadi in south Kerala are now well known all over the world. Architectural and sculptural reminiscences are numerous apart from the vital linguistic and cultural imprints like the abundance of Pali words in the present south Indian regional languages. Kerala is also known for the educational and health care achievements apart from its universal literacy. All these human development indicators are also part of the lasting legacy of Buddhism, the democratic, egalitarian and inclusive way of living that shaped the cultural contours of Kerala from B C 3rd century to A D 16th century.

Kerala is also known for its renaissance and its progressive left and democratic politics. This grass root level democracy and collective struggles of subaltern people are also a reminiscence of Buddhism that was the first missionary religion that welcomed women and outcastes to the mainstream community. The people or Bahujans who were defiant to Hindu Brahmanism after the destruction of Buddhism by Brahmanism were condemned as untouchables outside the Brahmanic Hindu Chatur Varnayam. These Chandalas or former untouchable Buhujan masses were and still are the agents of Kerala social revolutions or renaissance under the aegis of various radical social rebellions like the Narayana Guru movement, Ayyankali movement, Sahodara movement and various other progressive left and democratic political processes in Kerala.
According to researchers and writers in Kerala cultural history like P C Alexander, P K Gopalakrishnan, Pavanan, Puthussery Ramachandran, Dr K Sugatan, P O Purushotaman and Aju Narayanan Buddhism was introduced in Kerala in B C third century itself by the missionaries of emperor Asoka on their way down south to Sri Lanka which still is a Buddhist country. Jainism and Ajivaka philosophy also co-existed with Buddhism creating the great Sramana civilization of the South that has given birth to cultural classics like The Tirukural, Silapatikaram, Manimekhalai and the whole canon of Sangham writing. The Amana or Sramana seers introduced the Brahmi script and the art of writing in South India. All the early major inscriptions now available are written in Brahmi script in Tamil language. The ancient Tamilakam or Tamil country was a treasure house of Sramana heritage.
Most of the surviving ancient Hindu temples in Kerala are modified Buddhist or Jain Pallys. The brutal persecution of Buddhist monks and nuns and conversion of temples happened in eighth and ninth centuries under the leadership of Brahmanic priesthood and the militant agents of Brahmanical hegemony and violence. They argued with other religious scholars, defeated them verbally and annihilated them and their peaceful ethical religion forever. The priestly-militia nexus captured and converted the seat of the defeated to that of Hindu Brahmanical temples with extended support from elite ruling classes. In places like Mathilakam and Kiliroor there were even Buddhist universities in Kerala in the early centuries of the first millennium that attracted intellectuals and students from all over the world. Manimekhalai the heroine of Chatanar’s epic is said to have received higher education in Vanchi university near Kodungallur. 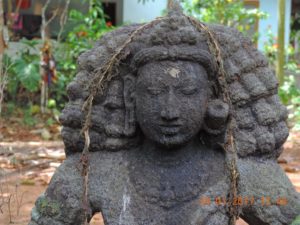 The word Pally is still the most popular affix used along with place, plot and family names in Kerala, Tamil Nadu, Karnataka and Andhra. The Pali word Pally means a non Hindu place of worship. In the ancient times it denoted a Jain or Buddhist shrine. Buddhism guided culture and society in the south for more than a millennium. Images and records of the persecution of the Buddhists by the Brahmanic forces are still available in Kerala in the form of stone carved images and in local subaltern oral narratives. The legend of Onam and Maha Bali still articulates the historic deceit of Buddhist Bahujan culture by the Vaman dwarfs. Poets like Sahodaran Ayyappan have extensively written about the internal imperialism of Hindu Brahmanism in Kerala. It is also worth remembering Swami John Dharma Teerthar, a disciple of Nanuguru who wrote The History of Hindu Imperialism in 1942.
Brahmanism created its notorious sexual colonies among the Sudra women and used their male counterparts as foot soldiers who ensured the caste and Varna system, the practice of untoucahbility and pollution. The vast majority of people, the Dalit Bahujans were outside the cultural geography of Brahmanism as Chandals and Mlechas, as they were the former Buddhist and Jain population. As Ambedkar and Dr K Sugatan in Kerala have observed, untouchability and caste had a dimension of religious persecution as well. Caste was specifically used against the former Buddhists who never submitted to Brahmanism as a punishment.
This hidden caste Hindu elitism is the real culprit behind all the fascist pogroms and genocides in post Independent India. All the minority religions in India and Kerala like Jews, Muslims and Christians still use the Pali word Pally to refer to their place of worship along with Jains and Buddhists in the south. The art, architecture and rituals of Kerala are well founded on the enlightened ethical aesthetics of Buddhism. Buddhism is making a second coming as an ethical philosophy and eco-spiritual alternative way of life all over the world and in India and Kerala in particular.
Nanuguru was often called the “Kerala Buddha” by his poet-disciples like Pandit Karuppan, Muloor and Sahodaran. The historic affiliation to Buddhism in the philosophy and praxis of Narayana Guru the seer of Kerala modernity is remarkable. The neo Buddhism launched in the 1920s by his disciples and intellectuals like C V Kunhiraman, Mitavadi and Sahodaran Ayyappan is also worth mentioning. Now the new Ambedkarite dalit movement in Kerala is also falling back to the Buddhist roots of the marginalised. Dr Babasaheb Ambedkar’s illuminating subaltern hermeneutics of Buddhism in his masterpiece Buddha and his Dhamma is also instrumental in the second rebellion of Buddhism against caste Brahmanism and social exclusion. Plenty of radical scholars and organic intellectuals in India and Kerala are now working on Buddhism like Gail Omvedt. The outcastes of Europe, the Roma have embraced Ambedkar’s Navayana and they are running Ambedkar and Buddha schools in Hungary and Germany resisting the racist violence of Neo Nazis and fascist skin heads. It could be well assumed that Buddhism is emerging as the cultural and ethical alternative of the present and future all over the world and particularly in Kerala. The Bahujans in Kerala who lost their ethical Sramana legacy in the onslaught of Hindu Brahmanic internal imperialism are now recovering from the calamity of Brahmanism and its fascist Hindutva avatars and looking forward to alternative paradigms and egalitarian new ways of living.
References
Alexander, P C. Buddhism in Kerala. Chidambaram: Annamalai University, 1949.
Ambedkar, B R. Buddha and his Dhamma. Bombay: Govt. of Maharashtra, 1980.
Gopalakrishnan, P K. Keralthinte Samskarika Charithram. Tvm: Kerala Bhasha Institute, 2001.
Omvedt, Gail. Buddhism in India: Challenging Brahmanism and Caste. New Delhi: Sage, 2007.
Pavanan and C P Rajendran. Baudhaswadheenam Keralathil. Tvm: Kerala Bhasha Institute, 2008.
Narayanan, Aju. Keralathile Buddhamatha Samskaram. Thrissur: Current/Tapasam, 2005.
Sugatan, K. Jativyavastayum Buddhamatavum. Calicut: Progress, 2011.
—. Buddhanum Nanuguruvum. Calicut: Matrubhumi, 2004.
Valath, V V K. Keralathile Sthala Charithrangal: Ernakulam Jilla. Thrissur: Kerala Sahitya Academy, 2001.
—, Thrissur Jilla,Thrissur: Kerala Sahitya Academy, 2001.
—, Thiruvananthapuram Jilla, Thrissur: Kerala Sahitya Academy, 2001.
Narayanan, Aju. Keralathile Buddhamatha Samskaram. Thrissur: Current/Tapasam, 2005.
Sugatan, K. Jativyavastayum Buddhamatavum. Calicut: Progress, 2011.