This is a continuation of the former article, Trekking thrugh the mountains at Manali : First day, finest experience

During Manali trekking, the place where we were standing was filled with many discarded plastic bottles. Most of the people there threw away the empty plastic bottles carelessly. Some people with us took an initiative to clean that area. 2-3 guys started cleaning, and soon all of us joined them and within no time we cleaned our surroundings. There were dustbins around, but no one used dustbins. So we collected all the bottles and put them in the dustbin.

Some cows were gazing nearby. A cow pushed Vaisakh T P a fellow trekker but since its horns didn’t touch his body, nothing serious happened.

By around 1 o’clock, we finished our lunch and continued our journey. We got almost one and half hours leisure time. So, the much relaxing leisure time gave us the energy to walk through pine forests. It was cloudy, but it did not rain. On the way, a little far we saw vultures eating some dead animal. Some feathers of the eagle were lying around, we picked one. We walked enjoying the scenery and chatting. 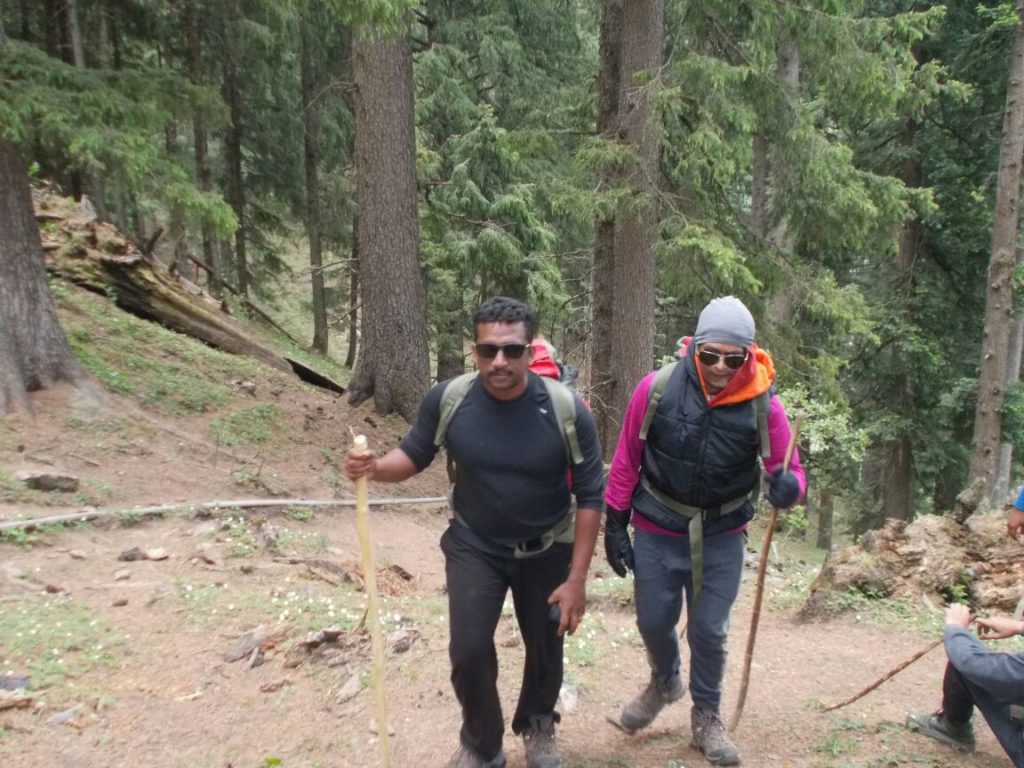 At around 2.30 we saw the name board of our camp. After walking for a few minutes we reached our camp. Camp leader was standing in front of the camp waiting for us. First he gave me a shake hand and after that he scolded me for wearing shorts. They had already given us instruction that not to wear shorts. Our team leader seemed to be a very serious and strict person. Later, during a personal conversation he told that he was from Cochin.

We walked through the camp for some time. Some people were playing mouth organ and singing over there. It was evening and so the atmosphere was really cool; a yoga session at that time, warmed out body though. Sun sets by 7.30. only after that we were allowed to have dinner. Around having a cup of Horlicks, we were offered sleeping bag. Unlike the cotton sleeping bags, this one was very thick and protected us from the real cold. Then we all gathered in the tent. All our old tent mates were with us. No one made any disputes or problems regarding their occupied space in the tent. We followed the same sequence in the new tent too. We all were in good rapport with all of them in the camp.

The place where we stayed was ‘Sola Tanky’. Though the stay was very comfortable, we did not find bathrooms that attractive. Bathroom was not at all spacious. One person could hardly wobble inside and the zip fixed allowed people to enter by opening it. Neither was it clean or well maintained.

We were told that when the temperature of the atmosphere decreases, the temperature of our body also decreases. To avoid such situation they advised us to wear pants and t-shirts. But I somehow thought it might not that compulsory for the first day. Our camp leader was a very experienced man. He had already attended 5 or more camps and visited many places. The camp leader was selected on the basis of their experience by YHO. He suggested me not to wear shorts. 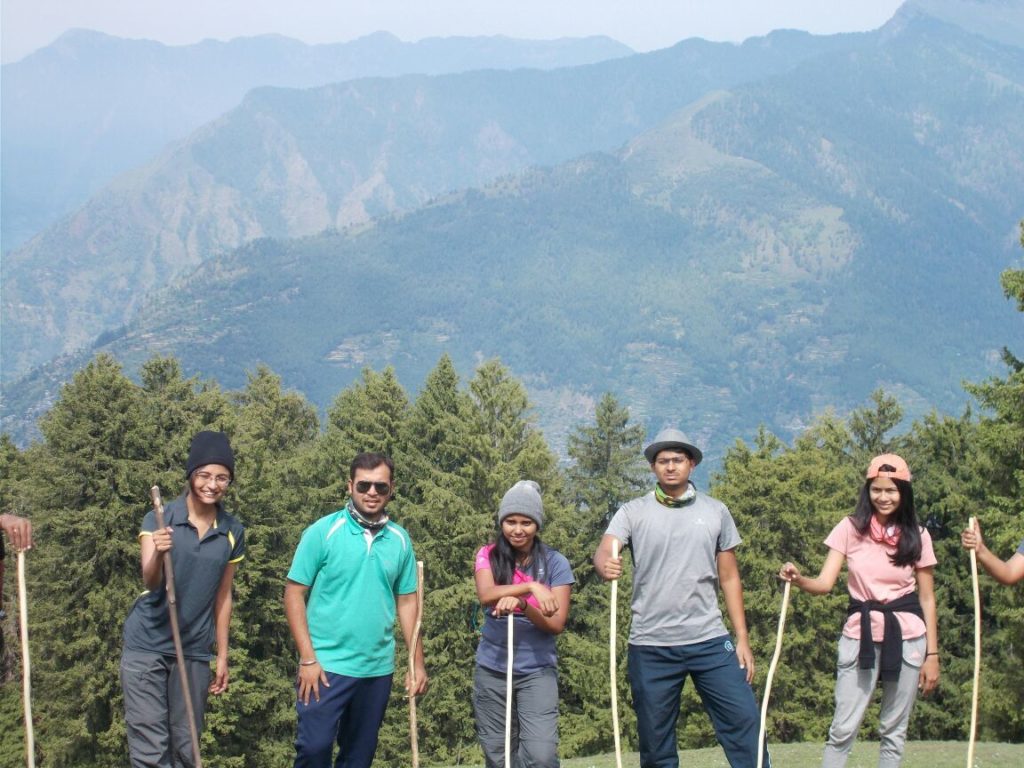 Before entering the tent our team leader said that when they blow a whistle we have to get ready and assemble in the hall. We all obeyed what he said. We heard the whistle after a while and we all fall in. First they gave us a welcome drink. After that team leader gave us a precise and important speech about the do’s and don’ts in the journey. He told we all can walk till dark. Any kind of sports activities was strictly prohibited. The reason was if we get injured, it would be impossible to get treatment. During night we were not supposed to go out without a torch. Electricity was not there, so we had to keep a torch. There were 7 tents altogether. One side of the tent was very deep. A stick fence was surrounded. Our team leader saw a bear on the previous evening. So he advised us to be very careful during night. He showed us the bathroom. Three bathrooms were there for gents and 2 for ladies. In between there was a water tank and 3 buckets for us to fetch water.

We had a very sound sleep. We were awakened by the whistle of the camp leader at 6 o’clock. It was very cold outside. Then too we went outside to have our tea. It felt exciting to have a hot cup of tea in a cold morning in the midst of beautiful scenery.
I enjoyed the tea. After one cup I need one more. I was sure that more tea was available since most of the people did not come to have their tea. I went to the kettle to get my other cup of tea. But 2 dogs stood besides the kettle and stared at me. So only after some time I took my second cup of tea. 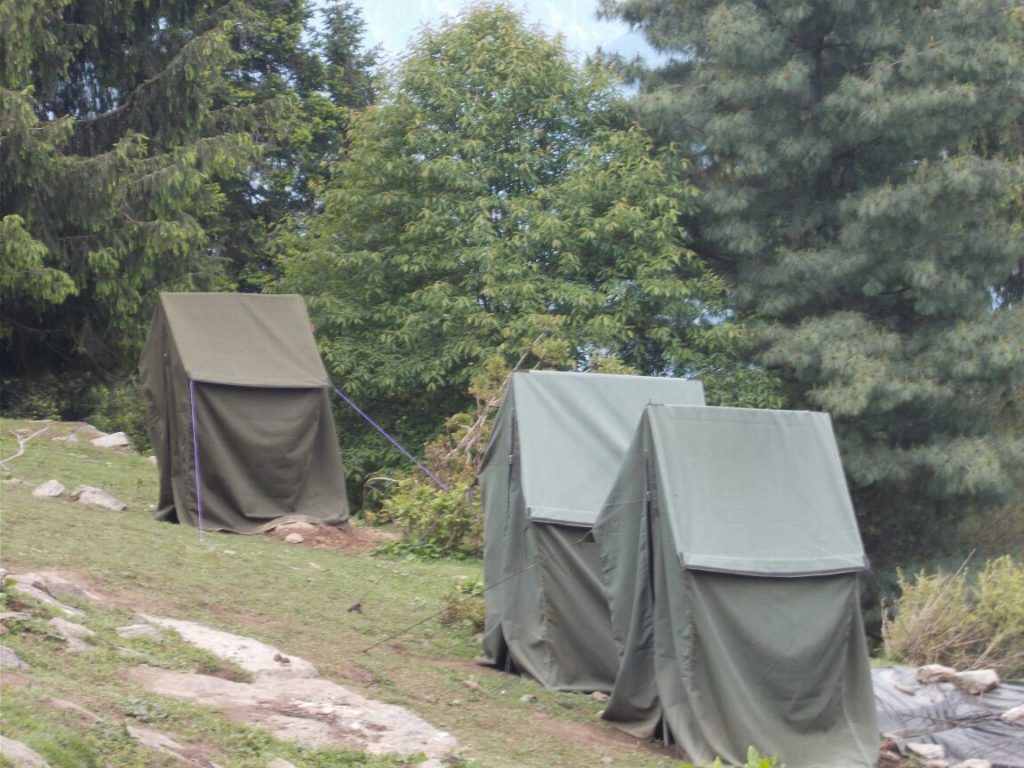 After some time we understood that some people woke up too early in the morning and finished their morning activities. At that time there was no queue before the toilets. We walked there for some more time. Then we saw some tourists from Maharashtra was about to start a yoga session. We too joined them and did yoga for 45 minutes in that forest. Then it was time for our breakfast the whistle blew. We all had our breakfast. We had to return the sleeping bag we used earlier. We packed it and returned to the camp leader. We got our packed lunch ready by that time. We took our packed lunch. Then the camp leader said thanks to us and we too thanked him. He greeted us for a very pleasant journey. He explained us about the importance of continuing the journey together, thought it was not that much challenging. We said goodbye to that camp and continued our journey.

The next journey started and we were very careful to walk along with others. The path was plain so we could walk very fast, but we tried not to walk ahead of our guide. We walked a little far and then reached the foot of a mountain. Many goats and shepherds were there. They were just about to start their grazing. Two dogs were with them. They started a fighting with the dogs with us. We were afraid because the dogs might come to us. So we moved a little and walked very fast. So we got separated from our other members. We four Malayalees with other 4-5 people from other states and the guide with other tourists got separated. So we got firing from the guide and others. After that we walked almost along with them through the mountain. We waited there for 25 minutes for the others to come. From there we could see a deep land without trees. On the other side there were high rocks and mountains. There was a forest in between those mountains. Pine forest was also seen from there. We rested there for some time.

The second day of Manali mountain journey started at 9 in the morning. After singing national anthem with jai jai we all started our journey. First we went through pine forest which ended within 10 minutes. Then we walked through tall grass, which was not at all challenging. But we were not able to see the sides of plain land through tall grass grown there. It was very easy to walk, so we forget about the words of team leader within 30 minutes and walked very fast. Depending upon the speed we all were divided into many groups. We were first, so after some time we heard many loud voices and whistles. We understood that they were scolding us so we waited there for them. Some big pebbles were lying there, so we kept our bags over there and sat there. After 10-15 minutes all others came and we all took a break for 15 more minutes. Others strictly ordered us not to walk fast. Chocolates were shared at that time. Some people advised that chocolates were very helpful at that time to regain our energy. The left side of that land was very deep, from there we could see a river.

Just in front of us was a mountain of Manali. From our first step we understood that there was no correct path to walk. The mountain was steep. Only small grasses were seen. We walked about 100 m; we could see only a 100 m distance from there. As we go far we found it very difficult to move forward without a path. We had to find our path and walk. We were afraid to stop in the middle, because we might fell down. We were using both hands and legs to move forward like animals. It was very funny to watch 60 humans crawling like animals. The journey was thrilling. Not so dangerous. After some time we got a place to halt. We took a little break and took deep breath and continued our journey. 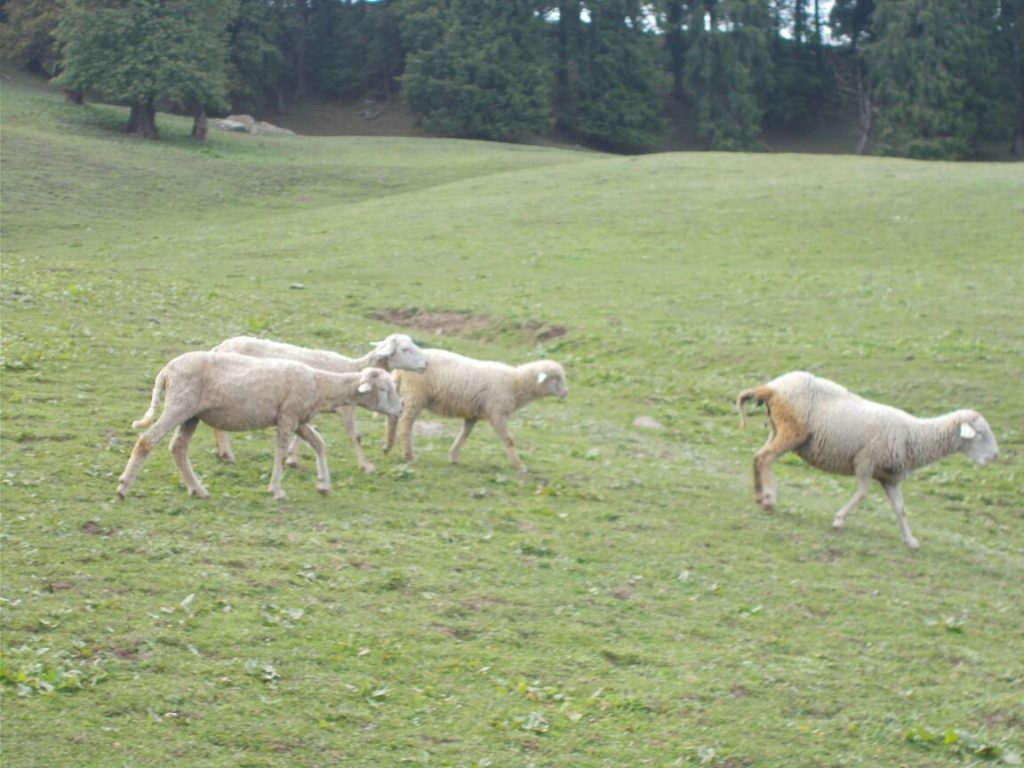 During the Manali mountaineering we saw a resting place on the tip of the mountain, the main guide told us to take rest for a while. We all felt happy because all of us were very tired. We all kept our luggage and sat on comfortable places. A little far green bush a sliding bush was there which tempted us to sleep over there. A cold breeze was blowing. Scenery from there was excellent. Mountain ranges and river in the midst of green forest were seen on the either side. It was a very thrilled and happy moment. Then we noticed the people who were coming with us. They suddenly kept their bags and took a stove from it.
About 2 yrs back during Agasthyar trip we collected drinking water from rocks in bottles. We developed an innovative technology to fill the bottles by holding 2 leaves in pipeline and created a water fall, thus filled the bottles. We did the same technology over here. Suddenly all members in our group wanted to fill their water bottles too. Though it consumed a lot of time we filled 58 bottles. Main guide shouted us for delaying time. After filling the bottles we walked fast to reach at others. Then we reached a turning which was very threatening and risky. It was for the first time we were going through such a risky area. On 1 side it was a very deep valley. We put some stones from where we could see it rolling for 5 minutes and then disappear to depth. If we too fell there we will also vanish within minutes. A narrow path was over there to walk. One side was so deep. So we pretended as very courageous and walked. Some people were walking ahead us. The scenes from there were amazing. But no one in our group had the guts to enjoy the scenery while walking. So when we wanted to see the scenery we stopped there for a while by holding the walking stick thoroughly on the right side of ground and looked the scenes through left side. It remained us the actor Innocent walking in the movie mannar mathai. It took almost 20 minutes to finish that portion.
After the thrilling and dangerous walk we reached our destination. With much relief we looked back and saw others walking through a safe and broad path from where we took water. Our guide selected very challenging path and we some muscle men followed him. Others came through easy way. We were a little disappointed by seeing them.

Continued in : Trekking through the Himalayas – Story IV