The narrator of this article is Anand Rajagopal, the driver of Ford Figo

The Day Before: Preparing for an exciting expedition

Preparing for an all India road trip had brought in us humongous dilemmas and confusions. Our cars Ford Figo and Honda City, though in good shape, had to be serviced. Ground clearance of Honda City was increased before the trip, using spacer, so that its under body do not touch the ground often. But Figo had a different plight. We had to meet up many unscientific humps and Figo, being a low ground clearance car might get some beating, the under body  dashed vigorously.

Maps and the logo of our Road trip were stuck on the sides of the cars. Those Vinyl stickers helped us not to leave any scars or scratches when it was removed.

Name, blood group and immediate contacts in case of an emergency, were stuck on the doors of  driver and the navigator seats.

Several types of medicines, from pain killers to antibiotics were carried of course, with proper prescription from a medic. As a precaution, we put some medicines for Accute Mountain Syndrome (AMS) also in the kit.

Apart from 120 liters of water for drinking, an induction stove, tea dust and  sugar were also carried .

The trip was flagged off at 7.30 am. from our home. The cars were given breakfast from the nearest petrol pump and kick started our journey. Our breakfast of the day was masala dosa from a decent hotel in Angamaly.

Continuing our journey, we entered NH 47. Our first struggle would be to manage the the infamous, traffic struck Kuthiran kayattam, an ‘’ill fated’’ hill that has to be covered through. We thought it would slow down our pace, as has done for many travellers who come and go out of Thrissur from the North. But this time, it was pretty easy as the traffic was less, thank God. In fact to our delight we have seen the new tunnel being built at Kuthiran, which would ease out the traffic in future.

We drove past Chennapally toll way. Satyamangalam forest was covered. Satyamangalam Forests are famous for its connections with Veerappan. The forests were mostly filled with bushes on the sides of small hills.

After Annur, we reached Kaduvattipalayam from where we had our lunch- a typical South Indian lunch with rice, sambar and pappad.

Post lunch we resumed our journey. We were welcomed by the deep forest of Satyamangalam on both sides. Many a times, animal crossing sign boards were seen, though we weren’t lucky enough to see even a single beast. Our cars climbed through 27 hairpin bends.

Though blessed with scenic beauty, the roads till Karnataka, mostly single roads, were not well laid. Acres of forest areas were then bordered by farm lands.

We reached Bangalore around 8 pm. We had our dinner from a hotel in Lakshmipura.

Day 2’s journey was started at 7.30 am. After fueling the cars from Bommanahalli and having breakfast – soft, round idlys and sambar, we entered the Bangalore -Mumbai highway and headed towards our next destination Hampi. At Chitradurga, on the highway, we took a turn to Hampi.

Even though the the roads till Hampi, were mostly 6 lane or 4 lane, we had a tough time as the roads were being constructed.

We were in company of hundreds of trucks but cars were a rare sight.

From a dabba usually meant for truck drivers we ate roti and egg burji. Though the place did not seem that hygienic, the food served was awesome. A young man served us the food. 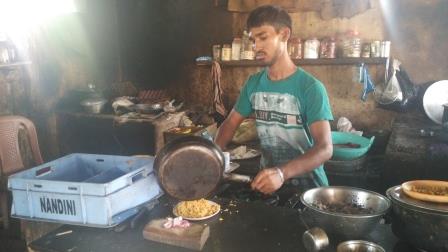 We continued towards Hampi. As it sounds funny, Hampi roads were full of humps. My Figo’s base had very tough time meeting the humps as its ground clearance was less..

Hampi- The Land of Whispering Rocks

We had already booked a hotel near Virupaksha temple. The area surrounding the temple resembled a colony with humpty number of Guest houses. The natives who owned houses rented them to tourists who come to experience the wonderful land of Hampi. Our rooms were booked for Rs. 4800 for 2 days. Later, we learnt that rooms were available in Hospet, a place outside the colony at cheaper rates.

We stayed in a Hotel named Archana. Rooms were hygienic but foods were costly. Adjacent to the hotel was the Tungabadra river. The summer had taken all its water back and hence stones, or rather rocks with carvings of Lord Siva and Nandi came to vicinity.

Hampi, otherwise known as Kishkinta is believed to be the birth place of Lord Hanuman.

We had to have bread, jam and biscuits for dinner as any outside food seemed costly for our budget. We had to be prudential on the spend as there were days more to be spent on typically “ alien” cities.

We had taken induction cooker, tea dust , sugar and that helped us sway our hunger.

Our next day program was “sight- seeing” Hampi. We booked a guide for Rs.1000 for taking us through Hampi.

All set to experience the magic land of Hampi. We, together with the guide, Mr. Pampavathy had breakfast from a small joint near the Virupaksha temple. A lady served the savory food that attracted us more for its cost. We had to give only Rs.50 for the idlys that all of us had.

Hampi vastly consists of the Ruins of Vinayanagara dynasty. As we viewed the sights, Pampavathy kept explaining to us the details .

Inside the temple, there was this wonderful sight. The tomb of the temple was seen inverted in a base.  Pin hole technology. It is believed that the Kings used this technology to know the time.

An elephant stayed to bless us on our heads. Tourists offer money to it, and blessings are poured. If bananas are given it swallows them. 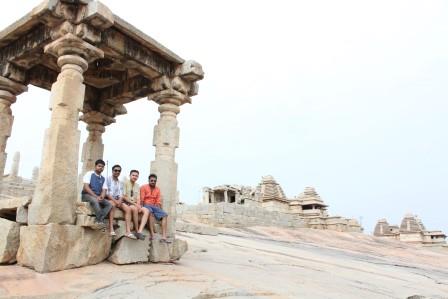 Our next place of visit was Vitthala Temple ( Chariot Temple). A chariot made in a single stone was the attraction; it is now explanatory why the name Chariot temple aroused.

It was too hot. We decided to have lunch. Thus we entered an eatery named Durga Tiffins in a place called Kamalapur. We had thali meals for Rs. 30/-.

On return from the temple, we spend some time on the banks of Sanapur Lake.

Tungabhadra dam was the last in our chart. Cars weren’t permitted to the area where the dam’s lusty view laid by. Instead, tourists were taken in a bus.

Sun set; and it was time to say Good Bye to the magic land of Hampi. Hampi gave us a visual treat that can last in our memories for a life time – no doubt!

We reached back Hospet and had chappatti and chicken roast for dinner. A sunny day’s outing had left us fully drained!

A weary night’s sleep, to energize us for the next day’s journey!

Continued in : Lavasa, Lonawala and Shaniwar Wada- where Nature and History blends