DISCLAIMER: As the unofficial, unsupported , self appointed Queen of Kochi and the biggest fan of the Kochi Muziris Biennale, the following reportage will be totally biased.

After two incredibly successful iterations, the current Kochi Muziris 2016 Biennale is titled Forming in the Pupil of an Eye and curated by Sudarshan Shetty. Shetty explains that taking his cue from an old story of a sage and a young traveller, he has used the notion of the ” eye as the only reflective organ of the body”, and that his curatorial approach draws on the notion that the world “is not an image of one reality, but a reflection of multiple realities and of multiple possibilities in time. (….) As its own process, Forming in the Pupil of an Eye comes from that junction o f the physiological with the conceptual”.
His mission statement aims to “draw in practitioners whose works are seemingly outside the expectation of contemporary art”. The show is very heavy on text and performance, and whilst this can be somewhat problematic if the language of the text is not understood, many of these installations are graphically presented and so can be appreciated formally. The accompanying panels in both English and the local language Malayalam also provide the visitor with insight into the intention. Performance is an interesting issue as many of these occurred in the first and last week and so the resulting work becomes a residue of that initial performance for the next 3 months. Ghosts almost. Zuleikha Chaudhari’s Rehearsing the Witness: The Bhawal Court Case is a particularly good example where the resultant installation and sound work is complete in its own right.
As is true for many large exhibitions of art there are “blockbusters” and this year is no exception. Much has been written about Raul Zurita’s Sea of Pain (2016), Aleš Šteger ‘s The Pyramid of Exiled Poets (2016), Camille Norment’s Prime (2016) and AES+F’s Defile (2000-2007) amongst others. These works are worthy of the accolades, but my six picks are both personal and parochial.

1. The venues themselves
I remember walking into a Palazzo venue at the Venice Biennale and tasking myself why would you try and outdo the splendor of the space. How do you let your artwork shout over the din of the place itself?. I thought the same in Istanbul, and Shanghai; Sao Paolo has a purpose built white framework by Oscar Niemeyer. The Kochi Muziris Biennale occurs in Fort Cochin (Kochi), an historic village that has been attracting traders, explorers and travellers to its shores for over 600 years. home to giant fishing nets from China, a 400-year-old synagogue, ancient mosques, Portuguese houses and the crumbling remains of a vibrant spice trade. The Biennale itself is centred around a sprawling collection of buildings called Aspinwall, but includes walled gardened Cabral Yard, warehouses in Mattancherry such as Anand Warehouse, Pepper House and the ancient ruins of Kottapuram Fort. Contemporary Art side by side with a bustling sea port. Walking into Anand Warehouse to see AES+F’s Inverso Mundus (2015) the smell of chillies from the adjacent room was a wonderful experience. 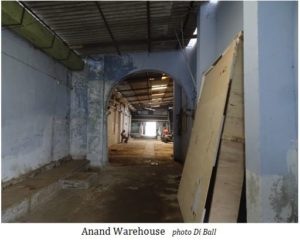 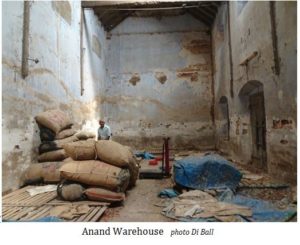 2. Hanna Tuuiliki: Sourcemouth:Liquidbody
Scottish/Finnish artist Hanna Tuulikki spent one month living in Fort Kochi researching the traditional Keralan artforms of kuttiyatam, a form of Sanskrit theatre practised in Kerala. Drawn to the watery landscape of Kochi, and under the guidance of Kapila Venu, she learned gestures and dances and eye movements pertaining to the “river”. Her resultant work for Kochi Muziris Biennale draws on these to present a 3 video installation combining a visual interpretation of the score; a disembodied mouth describes the performance, a close up of her eyes performs gestures, and on the large screen her body “dances/gestures” the river’s transition from source to mouth. The overall effect of the installation as we move from room to room is almost alien, yet the viewer recognises something familiar to the traditions of Kerala.
Hanna received the Holiday Inn Award for Sound Art/Electroacoustic at the Scottish Awards for New Music 2017 for Sourcemouth:Liquidbody 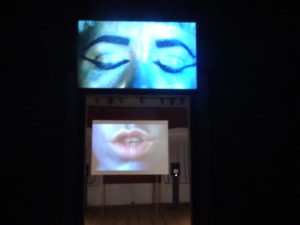 3. Alex Seton: Refuge (2015)
I became aware of Australian artist Alex Seton’s work some years ago at Brisbane’s Jan Murphy gallery and when i stubbed my toe on a marble blanket at a friend’s apartment. Seton grew up near a marble quarry and although starting his career as a painter and performance artist, he later returned to the medium he had played with as a child: marble. By using this historic stone in a contemporary context, Seton interrogates popular culture, the overlooked , and as in his work for Kochi Muziris Biennale, the political.
At first glance, Refuge appears to be a white tarpaulin draped over a solitary huddled figure. Closer inspection reveals it to be made of marble and empty of the actual body, rendering it more shroud-like in appearance. Alone. Displaced. The title informs us and allows the viewer to ponder on the current politics of asylum and the plight of refugees. It is a powerful work enhanced by its placement in TKM Warehouse.

I first encountered Subrat’s work at “Sleeping through the museum”, a collaborative exhibition conceptualized and orchestrated by artist/Waswo X Waswo as a collateral event of Kochi Muziris Biennale 2014 . I was immediately drawn to his surreal lithographs. Mythological Paradigm Prophesied is a new body of work comprising 60 panels depicting animals juxtaposed with technology in a surreal landscape. As visual metaphors, Behera questions the reality around us by placing the familiar in this unfamiliar imaginary world. His lithographic mastery is unquestionable and I was lucky enough to have the time to return to explore this work many times. 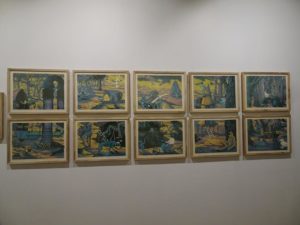 5. Katerina Zdjelar: Shoum (2009)
The melody of Tears for Fears’ “Shout” greets you as you are walking along the corridors of Aspinwall House. But the familiar tune sounds unfamiliar. As you draw closer you realise that the lyrics are strangely accented. Almost unrecognisable. You enter a small space with a television set and a seat. The screen is blank. Gradually a picture emerges of hands, a mobile phone and a piece of paper on which two men are trying to write the words of the song they play repeatedly. They use phonetics to transcribe the unfamiliar language. ‘Shoum Shoum Lajdi o Lau’. (‘Shout Shout Let it all Out’). The two men are musicians learning a new song for their cover band, but the close up style of the video suggests researchers attempting to decipher an ancient text, alluding to the political nature of miscommunication and alienation.
As an artist who only a few weeks before had had to learn a verse and perform in Malayalam the traditional “Mabeli” song for the local festival Onam , Zdelar’s work resonated with me on a hugely personal level.

I have known and admired Lisa Reihana’s work for many years. A New Zealand artist of Maori descent her work uses digital technologies to provides a focus on postcolonial discussion from the perspective of an indigenous artist. Native Portraits n.19897  (re)presents C19 staged studio photographs from Museum collections and reinvigorates their historical purpose by recontextualizing them with the contemporary. She places traditionally dressed and tattooed women and men in situations that evoke contemporary issues such as identity and indigenous representation, where the conversation between photographer and subject alter the narrative through irony.  Although these videos are from 1998, they are still current and it was a pleasure to see them reframed within Sudarshan Shetty’s curatorial vision.