Learning from each other in times of the Corona Virus

The BBC recently reported on the vigor with which India is rolling out its vaccines, whilst reminding us of India’s high rate of infections. “India has confirmed more than 11 million cases and over 157,000 deaths. The country has recorded the second-highest number of Covid-19 infections in the world after the United States” we are informed.
However this is a partial picture.
For while India has had many infections, the rate of infection compares favorably with large
swathes of the rest of the world. Perhaps even more importantly, as this map shows India has
consistently maintained some of the lowest rates of death found anywhere until very recently. 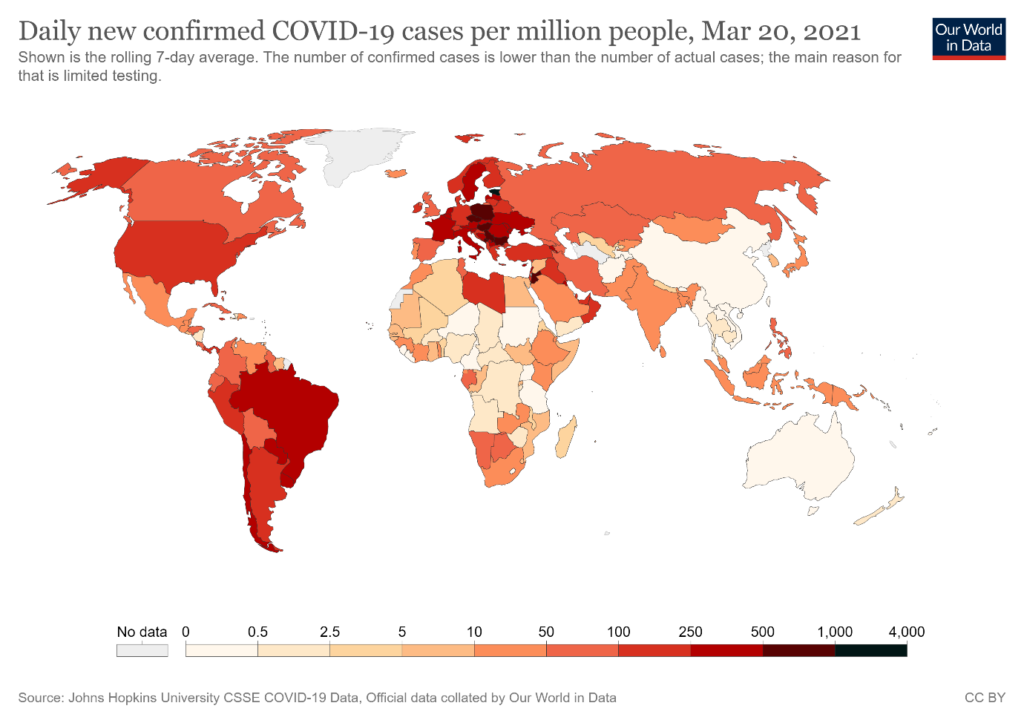 Most surprisingly India’s highest spike in death rates last September came plummeting down in October last year at precisely the time when people gathered for the Hindu festivals of Diwali and Durga Puja which had been anticipated to be super spreader events. A range of explanations was put forward. Some suggested that it was because the traditional measures of mask wearing and hand washing had been so rigorously applied. Others suggested that heat and humidity actually made corona viruses less active. An interesting explanation was that to survive the many diseases and lack of access to clean drinking water for many, Indians in general have immune systems which are robust and strong. However a key explanation, the use of the repurposed medicines hydroxychloroquine and ivermectin appears to have been completely ignored.

As early as March the Indian Council of Medical Research under the Ministry of Health and Family Welfare recommended the prophylactic use of hydroxychloroquine among asymptomatic health- care workers treating patients. The Maharashtrian Government then expanded its use of hydroxychloroquine supplying it to government officials working in infected areas. Covid Care Centers played a critical role in keeping covid cases down in north eastern states through the distribution of hydroxychloroquine tablets. Similar stories could be found throughout India as the Indians used their extensive knowledge of this malaria medication to avoid the waves of death which afflicted places like the US and the UK.
A similar story played out with ivermectin. Even safer and more effective, it can be used at all stages of treatment and is another cheap, well established repurposed drug. In the US doctors have been fighting unsuccessfully for ivermectin to be recognized as an approved treatment for covid19. Dr Pierre Kory founding member of the Front-line Covid-19 Critical Care Alliance explained that ivermectin, a Nobel Prize–winning anti-parasitic agent, was able to obliterate transmission of the virus, with miraculous effectiveness and that it had been the subject of dozens of studies.
India listened to Dr. Kory and established a home covid kit with zinc, doxycycline and ivermectin which cost $2.65 per person. Following this discovery it was adopted in place of hydroxychloroquine in some of India’s largest states. By the end of 2020 Uttar Pradesh which had distributed free ivermectin for home care had the second lowest fatality rate in India. The massive decline in death rates described earlier followed shortly in the heels of the adoption of ivermectin and it seems likely that ivermectin played a critical role. However, on January 16th 2021 India followed the West in its decision to roll out vaccines. Pfizer was the first to ask for emergency use of its vaccine. However the Indian authorities noting the adverse events which had followed the roll out of the Pfizer vaccine in other countries, asked for a bridging trial which Pfizer was unwilling to provide. Initially the Indian population appear to have been slow in their take up of the vaccine. This may have been because the virus is less of a threat in India than elsewhere and also because of the significant decline in the number of cases.
However since the adoption of the vaccine there has been talk of a second surge in corona virus cases. This may have helped the vaccination programme take off. However there does not yet appear to be evidence to suggest that the vaccination programme is having the desired effect. In fact, almost exactly a month after the administration of the first vaccines Our World in Data shows us that the corona virus cases in India are rising steadily: 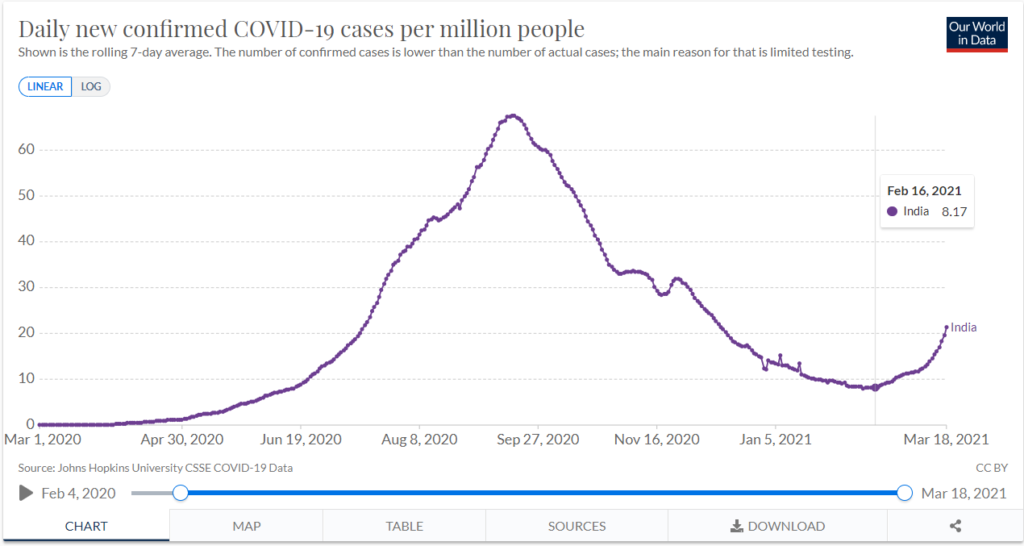 Furthermore, some of the states which have had the highest number of vaccine doses administered such as Maharashtra, Karnataka and Tamil Nadu now have very high levels of infections. And India’s increase in infections is now being duly followed by an increase in the rates of death. 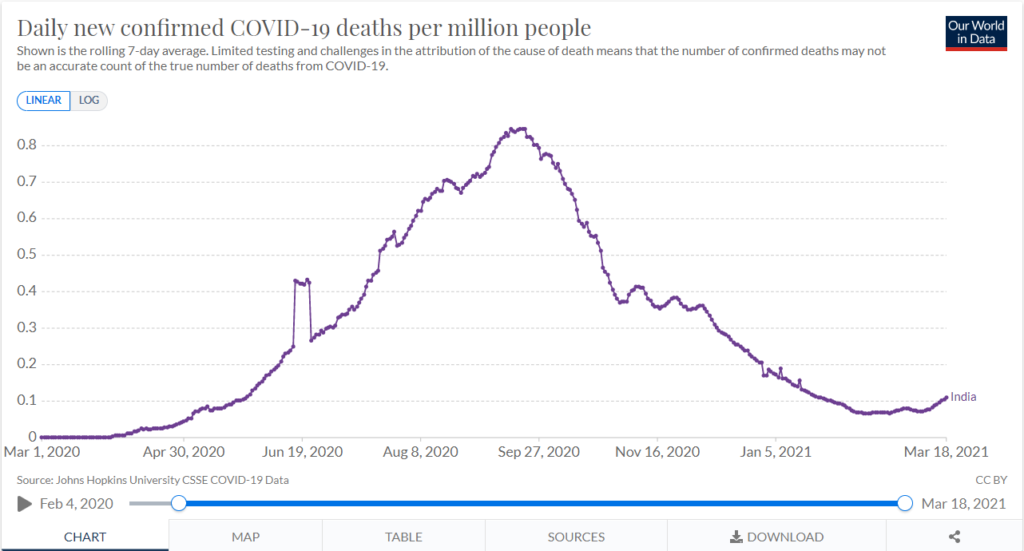 It would of course be negligent to speculate on the relationship between rates of disease and rates of vaccination. This is a job for the Indian health authorities who have all the facts at their fingertips. Furthermore, one would not expect immunity to be established immediately following the vaccine. In fact, in many countries spikes in rates of infection have even occurred. In Gibralter following the introduction of the vaccine the death toll from covid19 rose from 16 to 84 within a month. A similar spike in the rate of infection occurred in the UEA following the introduction of the vaccine on the 23 rd of December. Similarly when the vaccine was introduced in Israel it was followed by a sharp spike while the rates of covid infection in Palestine, declined. Serbia’s vaccination programme got going in earnest in early February. By mid-February there was a spike in infections. This pattern occurred elsewhere. 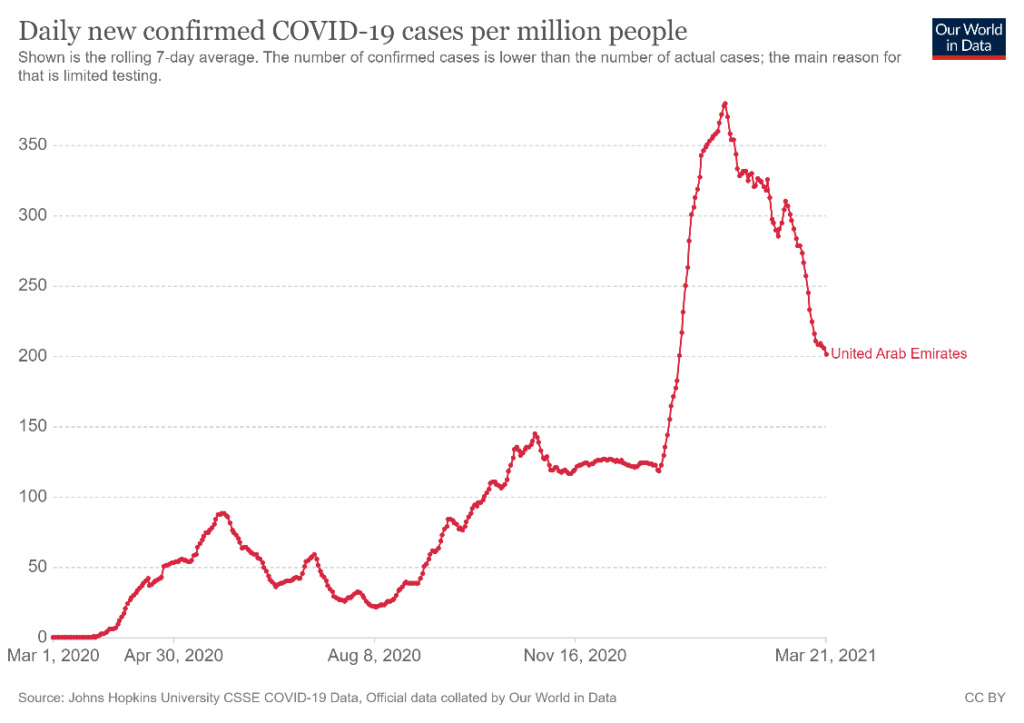 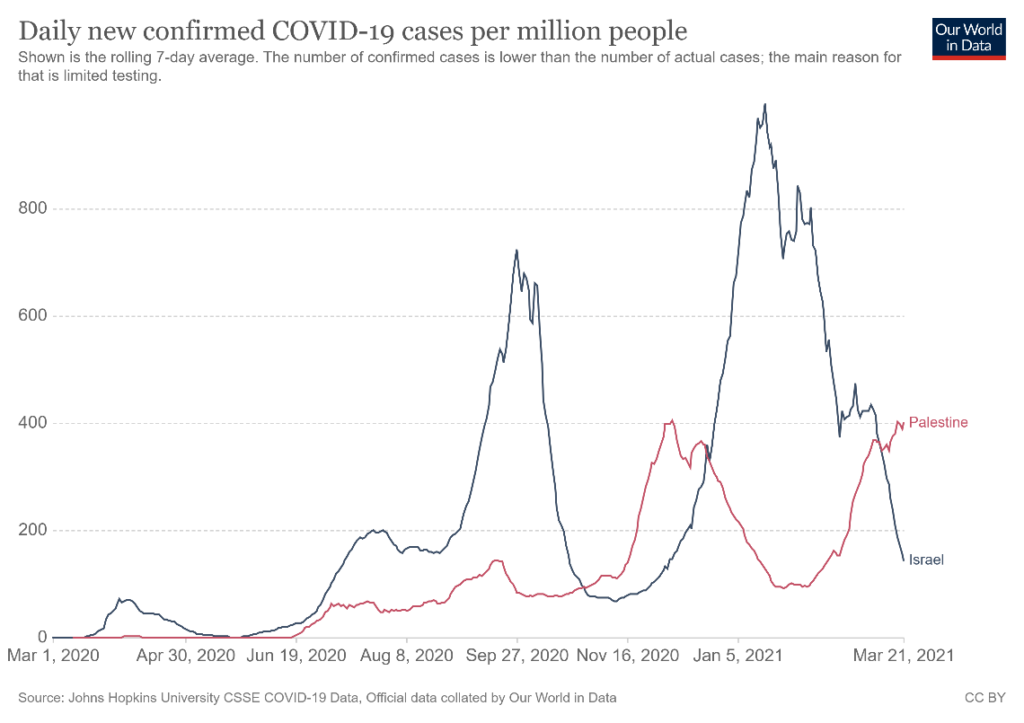 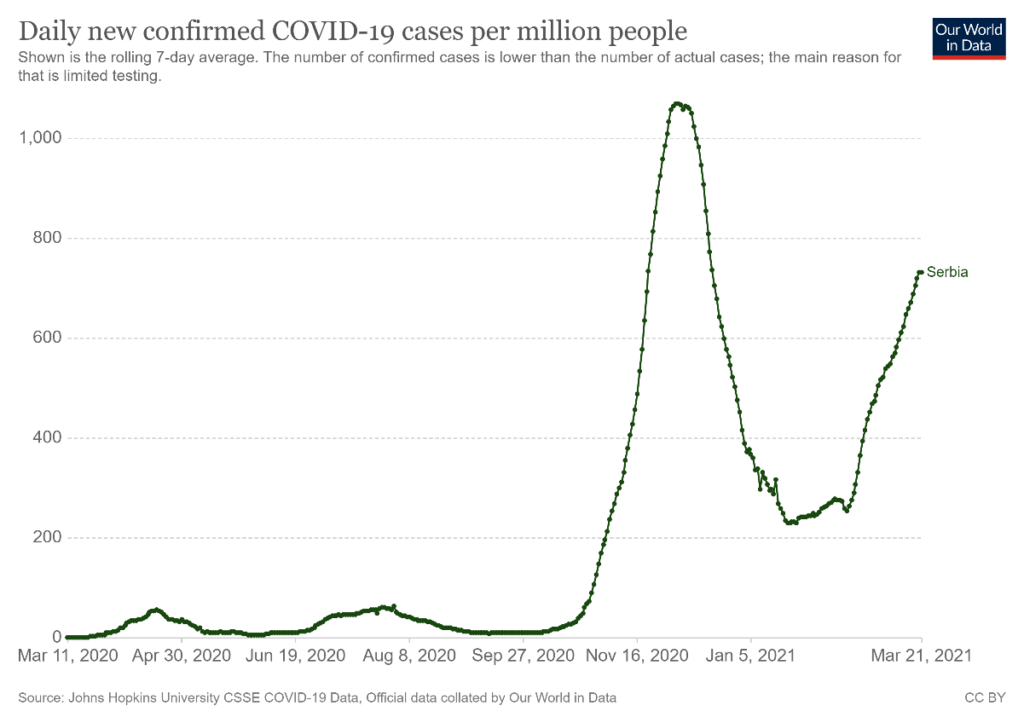 Various explanations have been put forward to account for this rise of infections following the vaccine with one author suggesting that the immune system may be weakened immediately following the vaccination. Unfortunately the UK health authorities tend to assume that a person who dies following a covid vaccination had pre-existing covid so this question is seldom researched.

This is a question which requires further investigation and is something which India as the vaccine supplier of large parts of the world may take on board. India should not expect the vaccine rollout to go without incident. Here in the UK a very large number of side effects have been reported and over 500 deaths. In addition, 18 countries have halted use of the astra-zeneca vaccine over concerns about blood clotting. It is interesting to note in this regard that 8,402 of the 8,483 adverse events recorded in India from the covid vaccine roll out were a response to the covishield vaccine developed by Oxford Astra-Zeneca.
Further a number of top scientists have written an Open Letter to the European Vaccines Medical Agency to put forward a number of significant safety concerns with regards to the covid19 vaccine. Perhaps even more alarming a top immunologist, Geert Vanden Bossche has suggested that the rolling out of a vaccine in a pandemic situation could lead to the rise of a far more severe virus, a weakened immune system and the virus moving to younger age groups. He calls for vaccines to be immediately stopped. While many in the UK are aware of safety concerns of the covid vaccine these pale in comparison to the spectre of the covid virus which is perceived to have caused so many deaths. The position of the average Briton is that the benefits outweigh the risks.
However, the benefits are not all that they seem. According to Dr Reid Sheftall you would have to give the vaccine to 119 people in order for one person to benefit from the vaccine. This is far from the 95% efficacy touted in the media for the Pfizer vaccine. The British Medical Journal has discussed at some length why the possibility that the efficacy of the vaccine might be considerably lower than we are led to believe (further information can be found here, here and here.) Here in the UK voices which question the government narrative cannot gain traction. Decisions are made by a monolithic structure; the Scientific Advisory Group for Emergencies (SAGE) which controls government decision making and prevents alternative views being given equal weight. We also have highly developed strategies to ensure compliance towards vaccines amongst our population.We have the military working with the government to overcome vaccine hesitancy . Departments in government help to ensure information which challenges the government’s viewpoint is regarded as ‘dis’ information and labelled ‘fake news’. This is unfortunate. In order to ensure the most effective health strategies a forum is required in which experts from a range specializations can thrash out the arguments which arise from different sources of information and findings. This is unlikely to happen in the UK. However, India has consistently maintained a more considered approach towards the covid health crisis. While the UK purchased the Pfizer apparently without a rigorous examination of the trial findings India exercised the caution of demanding a bridging trial. India made decisions about using hydroxychloroquine and ivermectin when this was in the interests of their citizens even if this meant overriding World Health Organization advice. India has actually advised certain groups to avoid the injection whereas in the UK the authorities think all adults should have the vaccine. India has acted with caution and integrity in managing the covid health crisis and this has been reflected in India’s positive results. Let us hope India maintains this independent and considered position going forward.

(Belinda Brown is a journalist who writes for The Daily Mail, The Conservative Woman and a range of
websites.) 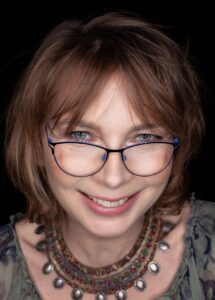