One key tenet of liberal democracy is the fourth pillar of the Indian Constitution. Because of its emerging function as the ‘public watchdog,’ it monitors the running of the nation by exposing checks and balances thus contributing to a healthy democracy. A free, objective, skilled media is an indispensable element of any democratic society. Mass media has played and continues to play a very important role in the socio-political lives of its citizens. 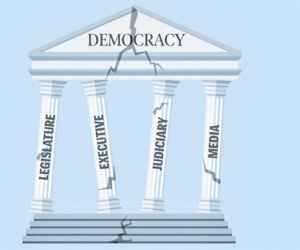 The Inter-American Court of Human Rights succinctly states a principle that is now universally acknowledged in international law: the exercise of freedom of expression in a democracy has little meaning if it can only be exercised on an individual level. Freedom of expression is not only about what you are allowed to tell your neighbor – or to hear from him or her. The European Court of Human Rights has concluded that media freedom is vital for keeping citizens informed.

We cannot think of democracy without active and neutral media. Officers of media offer an indicative and investigative platform for discussing the different causes and strive to provide solutions too for the proper implementation of the law. The Officers working to enhance media freedom have taken a solemn oath to preserve, protect and defend the development of the nation as a whole promising to uphold fraternity, sovereignty, and integrity of India faithfully in the duty they are about to discharge at the Tamil Nadu News Readers Association swearing-in ceremony.

Dr.I.Jayanthi, Judge, Former Secretary District Legal Services Authority, M.A.,M.A.,M.A.,M.A.,M.A.,M.A,M.L.,M.B.A,PhD,P.hD, the Chief Guest reiterated the words of Late Legend Justice, V.R.Krishna Iyer ‘the locomotive of cultural liberation of a nation is the free flow of information in the twin streams of aural and visual mass communication and added that that mass media being the fourth pillar of the Indian Constitution is set to exercise its fundamental right of freedom of expression and information through the Officer Bearers who will evidently uphold Article 19 (1)(a) of the Indian Constitution embodying the right to know, the right to impart and receive information, views, ideas, and opinions most efficiently. 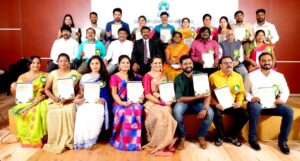 I was fortunate to have known the Vice President Mr. C. A Mohan Raj and in my exchanges with him regarding his intense contribution which he is earnestly passionate about (at the cost of his limited sleep) he told me ‘freedom of the press is not a luxury, it is not an extra, it is absolutely at the core of equitable development and I am most fortunate to be contributing for the equitable development of my nation, I always have and I always will…’

Journalism is often discussed in terms of its relationship to democracy and the final custodians are the citizens. A citizen-friendly democracy is a goal that the media should strive for in a country like India and the Officers of the media will strive to achieve it earnestly and passionately.

Dottoressa.Maffi, Advocate, holds a degree in law from London, a Legum Magister in Legal Practice from the City University, UK, A Master of Arts in Human Rights, a Legum Magister from United Nations Interregional Crime and Justice Research Institute, Italy, a Certificate in Migration and its link to Peace, Security, and Sustainable Development Agenda from University for Peace, Costa Rica, and a Certificate in Global Governance, University for Peace, Costa Rica.