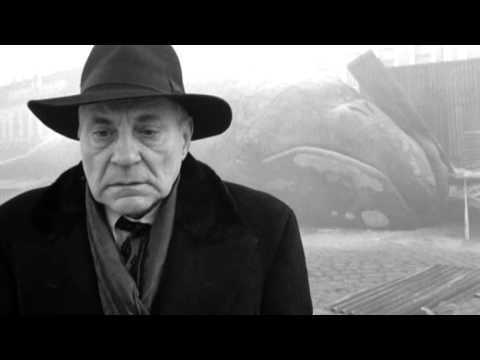 Great movies look greater while watching for the second time because you know what to expect and you are aware of the timelines. It was the same with the movie “Werckmeister Harmonies” as well. Having planned a lot to watch it on a tired-less day with a clear frame of mind. It failed. It always does, it was a tiring day after weekend work in office and pressure cooker brain fry. To sit in a dark room with high contrast black and white frame itself was a tough as such.

More than a thriller, the film draws you in its eeriness. Anyone who had watched Stalker would immediately notice the similarity of it with this movie’s first scene. The scene as such is a superb one, it feels like you’re in a ride. When Janos explains the Solar system, it’s actually funny as well. It was funny. When comparing it with the Stalker’s pub scene, this scene’s cinematography looks better and Stalker’s settings look better so can’t really single out a winner. The camera angles are lovely in this scene and so in the next scene. People who have read about the movie would know that the film contains only 39 cuts but it doesn’t really feel so because you see a lot of dimensions in each scene. Things appear even more beautiful when you watch it for the second time. It will look better and better with each time you watch.

For example, take the very first scene and now imagine where all the camera went, it’s very tough right. Next time you watch the movie, trace the camera, you’ll know that’s equally tough. And after a point you’ll lose track of it too. The success of the film is it makes you think all these crazy ideas, how a particular scene was created, where the camera moved, how the perspective changes etc. That thought wouldn’t come in every other movie. That’s an achievement.

Each shot can be taken and talked about separately like a short film and that’s the right way to do so. If I have a film running parallel to me in another screen, I could give a live commentary. If people own original DVD do watch the live commentary. It’s education. Without wasting much time, if first scene was my favorite scene, I loved the second scene because of its beautiful pattern. The camera starts at door, consider it north, swerves to east, then to south, then to west. Thus making it a beautiful Rangoli. If you could watch the scene again after reading this review please do so. I’m sure you’ll enjoy it like a child.

And when it comes to perspective I loved the scene of a truck. May be this might not work for people who are watching for the first time. This scene might strike if people have good memory. I don’t have, so it didn’t strike on my first viewing. You start seeing a truck from long distance which closes on you and you see it at last from Janos’ point of view. At one point all you see is the body of the truck with that irritating noise of truck. You feel as if you can see it inside. Now I knew what was inside, first time I don’t know how it’d be. But the beauty here is it goes to a poster where they mention about The Whale, The Prince and Magic. What’s even more beautiful is how things change after a while, where the circle would get complete. After a chaos, the camera pans to Janos and then the same poster again. Such a beauty. The lovely thing was the circle.

The films standout scene would be the long walk, again a beautiful use of camera to capture emotions. I don’t know how everyone performs so well for a great film. May be they know beforehand that it’d be great. Because to have such a crowd walk with so much discipline with so much intent in face is not an easy task. Kudos to the director. And the way the scene unfolds in hospital and finishes off is another brilliance.

Everyone would have noted the music and shift in composition, be it the mob scene or in the whale scene but the thing that we fail to notice is the sound. The truck coming closer to us, the opening of Whale door, the footsteps of people. That’s the thing which brings eeriness to the movie. I’m not sure when was the last time I wrote such a passionate piece about an art film, I’m more an emotional movie fan but the fact that I was touched by this piece, like music, like a harmony shows how emotional the movie is.