Monsoon can be pleasant, but at the same time it can be treacherous too. Along a recent set of tragic events, once again another person succumbed to death when he stepped on an open manhole. Last year, the city had lost Dr. Deepak Amarapurkar because of this same problem. He fell into an open manhole during floods. The tragic events are an indicator of how there still exist open manholes even after several cries reported by the public. People raised their voice against this, but nothing happened. Hence, they decided to take the matter into their own hands.

The two founders of Media Tribe, Mr. Sunil Gupta and Ms. Rima Mishra have both posted strong tweets on the issue in an attempt to awaken the concerned people and cover up the open manholes. In his tweet, Mr. Sunil suggested that the BMC install Manhole guard which will prevent people from falling into them. Ms. Rima re-tweeted the same post saying that despite multiple attempts, no action has been taken and so, someone needs to step up to the matter. All these two selfless souls want to bring this issue in front of the honorable Chief Minister Mr. Devendra Fadnavis so that something can be done about it and the society can become a better and safer place for its people.

“Our idea was very well received by the public who felt that the government fails to do anything about the manholes menace and it was time that we share our ideas with the government and we just did our duty as citizens of the country!” – Said Sunil Gupta and Rima Mishra, Founders – Media Tribe. 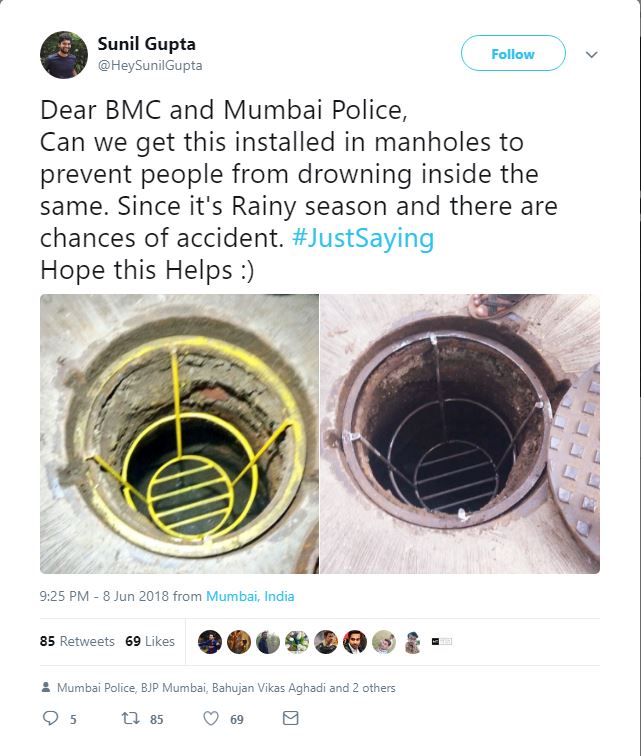 This is a brave move by these two citizens as it’s up to the common public to raise a concern to bring a change. We salute Sunil and Rima for their brave efforts! In a hope to witness a change towards the safety of the citizens…