A Martyr for Women Liberation: Nangeli the Brave Avarna Woman who Ended the Breast-tax in Kerala - Talismanian 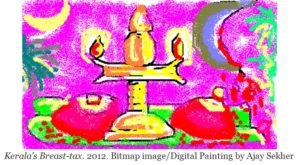 It required the sacrifice of a brave Avarna woman called Nangeli of Chertalai in the current Alapuzha district of Kerala to end the infamous breast-tax in Kerala instituted by the erstwhile Travancore kingdom. There were more than 100 types of caste taxes imposed on the Avarna people, especially Nadars and Ezhavas in Travancore. This casteist custom was a form of humiliation of the former Buddhist Bahujans in Kerala who never accepted and succumbed to Brahmanical Hindu religion and its priestly-militia patriarchy.

Caste and untouchability were punishments given to the broken Buddhist people who resisted the Brahmanic Varnasramadharma and caste as Ambedkar in his Who were the Sudras? or Who were the Untouchables? explains or Dr K Sugatan in his Buddhamatavum Jativyavastitiyum (Decline of Buddhism in Kerala and the Origin of the Caste System) observes in the context of Kerala. 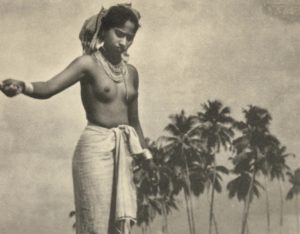 The place of this great Avarna woman is now known as Mulachiparambu. Mulachiparambu is a northern suburb of Chertalai or Cherthala town in Alapuzha district of Kerala.  It means the plot or land of the Mulachi, where Mulachi signifies a woman of breasts. A breasted woman more specifically. We may also call her the woman of brave breasts. At the beginning of the 19th century there lived a brave woman called Nangeli or Nancheli (the beautiful one) in Cherthala. According to subaltern historians like Dalitbandhu N K Jose the incident happened in 1803 during the infamous regime of Dalava Velu Tampy.  She sacrificed not only her breasts but her precious life itself in protest against the inhuman breast-tax of Travancore that formed the southern part of Kerala in the 19th and early 20th centuries. Travancroe was formed in mid 18th century through extensive militarization and raids carried out by Martandavarma over a few decades unleashing unimaginable violence on the neighboring kingdoms. He hired the Marava militia from the Pandya region and liquidated the old Travancore or Venad army and its Avarna soldiers.

Martandavarma was behind the creation of a caste Hindu or Savarna militia in Travancore that unleashed a regime of terror especially for the Avarna people in general. The Travancore kings also achieved “Kshatriya” status from Brahman priesthood through bribing rituals like Tuladanam, Murajapam and Hiranyagarbham in which the gold and gifts were disseminated among the Brahman priests after the rituals. They were originally invading Kolaya or Marava clans who crept into the region from outside. They also fed the Brahmans and caste Hindus with the inhuman taxes levied on the Avarna the former Buddhist laity who never accepted the internal imperialism or Hindu colonialism of Brahmanic Hindu Varnasrama pagan religion. There were taxes on the heads and breasts of Avarna. Taxes were levied to wear clothes and ornaments or even to grow a mustache for the Avarna people in Travancore till late 19th century. 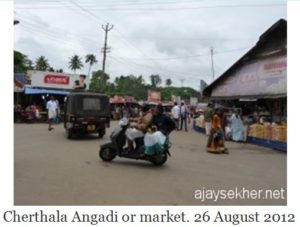 The princely state of Travancore established by Marthanda Varma in the mid 18th century with the bloody expansion into the neighboring kingdoms as in the pogrom at Kayamkulam, was thriving with various barbaric taxes like Mulakaram and Talakaram.  There were more than 100 infamous taxes imposed on the Avarna or former untouchable people in particular because of their Buddhist or Amana or Sramana lineage. Most of that went into the vaults of Padmanabha temple along with the tax on pepper and other spice trade.  It is very important to remember that the loot from the neighboring kingdoms and revenue from heinous taxes on the Avarna population constitute the chunk  of Padmanabha “treasure” today. Avarnas were casted away and humiliating untouchability practices were imposed on them because of their Buddhist genealogy and resistance to Brahmanic Hinduism. They never accepted the priestly patriarchy of Brahmanism and its priestly-militia nexus that usurped in to power.

Avarna women were not allowed to cover their bosom in public.  It was part of the humiliating, dehumanizing and degrading practices associated with untouchability and caste that were targeted specifically against the former Buddhist population of Avarnas in Kerala. Buddhism was flourishing in Kerala or Chera land from Asokan times onwards in early BC 3rd century. Only after the 10th century AD Brahmanical Hinduism was established in Kerala through bloody violence and usurpations. Buddhism was totally defeated and expelled from Kerala only in the middle ages. Mayana Buddhism survived in some marginal pockets like Sabarimalai and Guruvayoor as in Tirupati. But by 16th or 17th century Hindu Brahmanism converted all the Viharas called Pallys into Hindu temples. Even today the Pali affixes Pally and Chery or Sery are abundant in Kerala as well as in South India, from Odisha to Tamilnadu the Pallys and Cherys abound in place names evidencing the Buddhist shared pasts.

There were protests against such Brahmanical casteist social suppression in nineteenth century itself in places like Kayamkulam in the south under the leadership of pioneering champions of human rights in Kerala like Aratupuzha Velayudha Panicker who founded schools, libraries and temples for the untouchables, even before Narayana Guru in the 1850s in Mangalam and Cheruvaranam at Chertalai. Perhaps it could be the memories of Nangeli of Chertalai that inspired Aratupuzha Velayudha Chekavar to unleash his brave cultural fights against the caste Hindu system through his earliest breast-cloth agitations and agricultural strikes in Kayamkulam region. 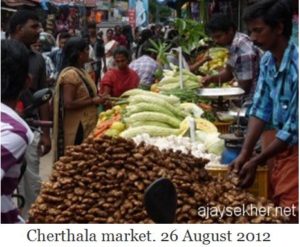 In Cherthala it required a woman martyr like Nancheli/Nangeli to stop the Breast-tax altogether, all of a sudden at the wake of the 19th century.  Ezhava women like Nancheli used to suffer this public shame in the name of brutal laws in a barbaric feudal state. It was also enforced in the name of Brahmanic religion and caste system. But Nancheli cut both her breasts off and presented it to the Pravarthiar, the ‘revenue’ collecting village officer of the Travancore state as he rushed to her house to collect the breast-tax on hearing that she was covering her bosom in public. This refusal to uncover her breasts in public and the refusal to pay tax to cover it perhaps could have come from the sense of ethics and morality that was prevalent in Kerala from BC 3rd century to the 16th century when Buddhism was a moral force and liberating foundation in the region. It is through women missionaries like Manimekhalai the daughter of Madhavi and Kovalan or the Chandalabhikshuki about which Asan and Tagore have written in poetry and plays that Buddhism became a real cultural force in south India as testified by the Terigadha the songs of the elder nuns in Teravada. The five fold ancient Tamil epics including Silapatikaram and Manimekhalai are Sramana or Amana in spirit. Tirukural also preaches an Amana or Chamana anti caste and anti Brahmanical ethics.

Anyway the selfless act of Nangeli brought immediate justice to the tortured and humiliated Bahujans in Travancore in early 19th century. The very next day the tax was withdrawn by the esteemed “Maharajah” of Travancore fearing public agitations following the death of Nancheli.  She literally bled to death after seriously suffering from the open wounds. She reminds the modern reader of Mahasweta’s Stanadayini.  But she is not just a Kamadhenu and a martyr but a rebellious rising Rudali as well. Her husband Mr Kandappan or Chirukandan who was away during the gruesome incident, after returning home, killed himself on her pyre .  It is the only instance of a man ascending the pyre of a dead wife in the whole of human history.  This overwhelming self sacrifice by the Avarna Ezhava couple Nangeli and Kandappan gripped the land and its regime forever.  The place became known as Mulachiparambu ever since.

This kind of a self sacrifice and furious protest are unique in the world regarding women’s liberation movements anywhere in the world.  Gayatri Spivak talks about the suicide of Bhuvaneswari Bhaduri in her periods as an act to rewrite the text of Sati or widow sacrifice in “Can the Subaltern Speak”.  Here you have the sacrifice of a woman and the equally selfless and valorous response by her husband that literally rewrote the patriarchal elitist textuality and practice of Sati in early 19th century Kerala.

Further studies are required to politically and ethically theorize this unparalleled event in the history of human liberation especially in the context of Brahmanic patriarchies in India and Kerala. Gender and caste critical readings of this event from various subject positions are inevitable.  It is really unfortunate that even local people are forgetting this illuminating episode in the long fight for human rights, dignity and equality in Kerala. It is the task ahead for women liberation activists and women studies researchers or critical scholars to enquire more into this unique act of selfless sacrifice done by this brave daughter of Kerala that changed the course of history, polity and society in unprecedented ways. When caste Hinduism, Brahmanic patriarchy and its Varansramadharma avatars are making second comings in the form of Hindutva fascism such studies and initiatives would be liberating and radically empowering, the sexed subaltern in particular. 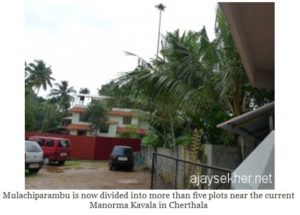 On Sunday, 26 August 2012 I talked to various people in Cherthala town and market but unfortunately none of them remembered the incident and the place.  After hours of searching an auto driver reminded me to contact the S N D P Union office near the X-ray Junction.  The president of Cherthala Union gave me the details of the place.  Now it is divided into five or six plots and the topography has changed entirely.  Now the place is known as Manorama Kavala.  The old S N D P Union office and Maruti outlet stand near the spot. 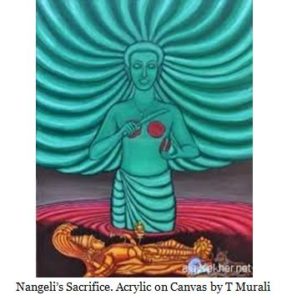 It is a serious instance of public amnesia and collective repression of vital public history and memory.  Savarna (elitist and upper caste/Brahmanical) media culture, pedagogy and academia play an important role in this conscious erasure of recent vital incidents in Kerala history that happened just a century ago.  It is also an instance of sanctioned ignorance if you use the vocabulary of Spivak herself. Instead of such crucial moments of protest and struggle that democratized Kerala society at the grass roots the state and its textbooks are creating hagiographies and monuments for the fabricated feudal champions of patriotism and pseudo nationalism. Public fund is being misused by state universities to make bigger and bigger idols of ideologues who enshrined caste and Varna in Kerala after the 9th century. Xenophobia and hatred of the other is whipped up by it historians and poets in a true cultural Nationalist fashion. 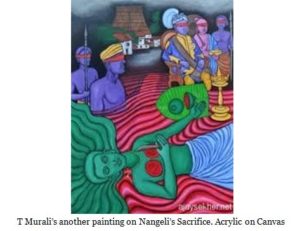 The government and the new vocal women’s organizations in particular must take immediate steps to record and rehabilitate the memory of the great sacrifice by the Avarna woman Nangeli at the earliest. As poet Kuripuzha Srikumar has recently opined there should be a fit memorial for Nangeli at Mulachiparambu. Such glorious episodes of subaltern speech and resistance must be taught in schools itself and not just in universities to the upcoming and growing minds in Kerala.  That could be an apt check to the caste Hindu or Savarna elite pedagogy and mainstream media culture in Kerala today.  Let the people, women, students and children in particular know about their land, culture, real struggles and real histories.