The recent Mersal Controversy painted by Political and Religious hues

Off late, controversies have become confined to particular party in India. Though the agenda behind the splurging controversies are unknown to the public, the Prime Minister and his fellow men are curiously involving themselves in many notorious statements. The Taj Mahal controversy has just been subsided. Even the Kerala Tourism Board tweeted supporting the Master Piece that went viral. It is interesting to note that the Taj Mahal statement was thrown within a few days of BRD Medical College Case where 69 children died in 4 days. Does it show that controversies are voluntarily built to hide some flaws?

What is Mersal Controversy? 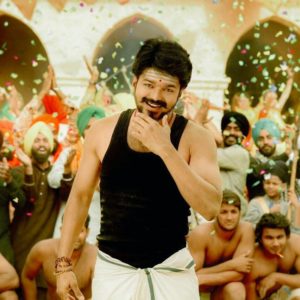 Several BJP members have taken offense to a scene in which Vijay’s slams GST in his movie Mersal that released on 18th October.

In the scene, Vijay’s character points out that a country such as Singapore can afford to provide free healthcare services by implementing only 7% Goods and Services Tax (GST) . But, India is unable to provide the same while levying a 28% GST. He also asks why liquor is free of GST when people have to pay 12% GST for medicine. He also bombast about government hospitals not having oxygen cylinders, for not paying the contractors, a comment on the recent Gorakhpur tragedy in which several children died.

The character also brings attention to the incident where due to a powercut, four patients died and the incidence where a baby kept in incubator in Vijayawada hospital dies after rat bite.

Vijay’s character also adds that private hospitals thrive in India because everyone is scared of Government Hospitals.

BJP members rallied for this scene to be cut from the film. They have also given a communal angle to the incident by highlighting Vijay’s religion. This has fumed many statements from many politicians like Rahul Gandhi and Stalin. Rahul Gandhi has tweeted not to “Demonitise Tamil Pride”. 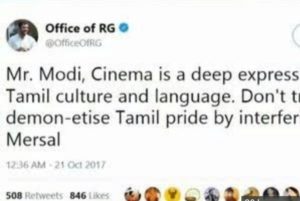 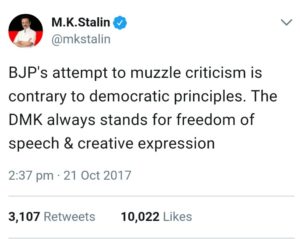 Mersal released on October 18 th and collected 51 crores in the opening day. The producers of the film have agreed to cut the controversial scenes from the film. We remember that it is not the film film to get into controversies; many actors, directors and producers from many industries have drowned into controversies related to their films earlier too. Many a times we forget that Cinema as a mere representation of art and why not entitle them to “ Freedom of Speech” that our constitution has offered its citizens. Let us take the monologues or dialogues rendered in films as opinions of the characters of the story and try not mixing up with politics and the religion of the Actors involved. Let us take changes happening in our society in its right sense and believe that any change is good for the time.