This is the continuation of the previous article, The Call of the Himalayas. 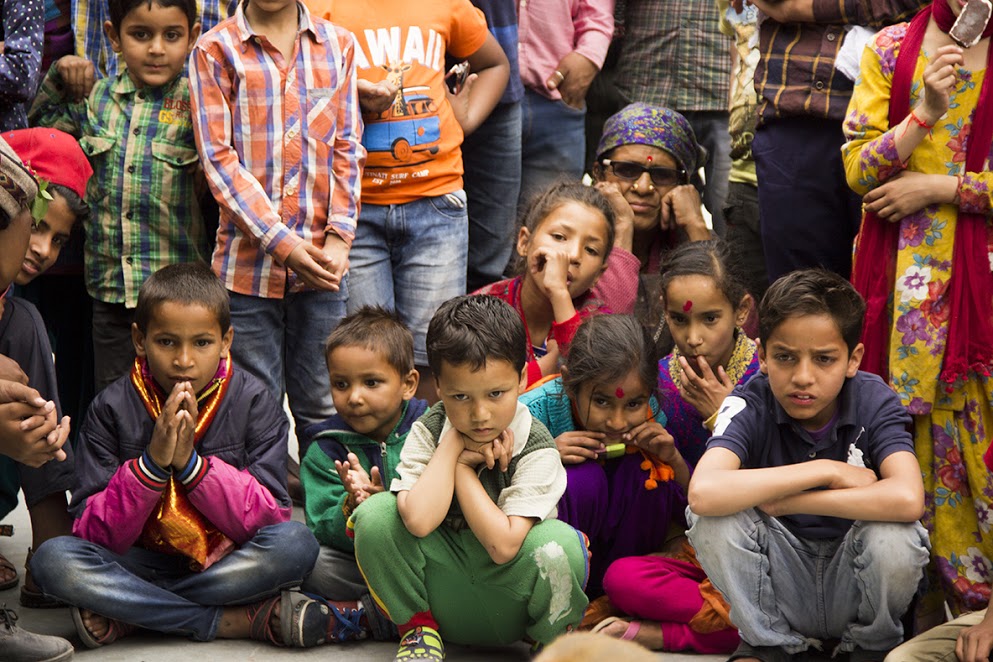 Rohtang Pass was always a dream destination. We rented a Royal Enfield bike for Rs.1000 for the journey to Rohtang, the highest point on the road which is about 51 km from Manali.( Rohtang Pass is situated at an altitude of 3978 metre above the sea level). A bike expedition at a temperature as low as 10 degree celcius made my chin trembling. Endless shops that sold heavy jackets which were separated by unique numbers ran past my side. My co traveler who was seated in the pavilion kept on shouting ow-hoo every time he experienced an adrenaline rush.

The River Parvati and deep woods bypassed our way. We took a pause at the Solang Valley.

Solang Valley:  A beautiful picnic place, surrounded by meadows and by trees of silver oak. A place best suited for adventure tourism. Nurtured by gliding adventures, the place was over occupied with hundreds of tourists.

Glides are available at different rates depending on the height of the gliding point. Three different points of different heights charge rupees 1000, 1500 and 2000. A guide will accompany you on each glide that lasts for a maximum of 2 minutes.

As payment was done only in cash and we had a very bad time with our cards for some technical issues, we just couldn’t experience that flying extravaganza. 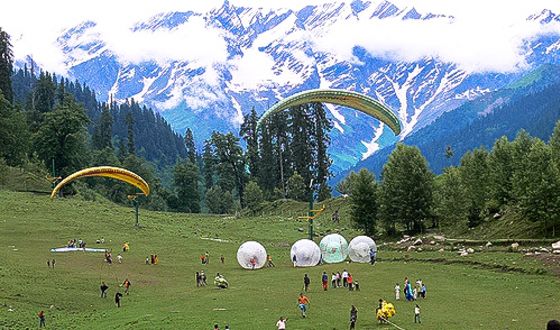 Bud bad luck was not that pathetic as we ended up finding cable car services that quenched our thirst to “adventure”. A drift in the cable cars cost Rs.650.

Major portion of tourists consisted of couples. We, noticed people taking pictures with the rented traditional dress on. The prints of the pictures shot pokes within a minute. Smiles broaden much wider than they were on posing, while seeing the prints.

After Solang valley though we continued our  journey to Rohtang, we couldn’t resume it because of the land slide that happened in Rohtang. We had to give up our desire of viewing Rohtang and returned back to MANALI.

Inorder to utilise the rented bike, we drifted  through the neighborhoods of the town and in a short while we found ourselves in front of the facade of the Hadimba temple that is located in Old Manali. Old Manali, as compared to the new town of Manali is a quiet one, with a few hotels and shops sprouted .

The temple is named after Hidumbi Devi, the wife of Bheem, the second in the Pandava brothers. It is believed that the couples had their good times in the region. Hidimbi devi is the mother of Kadolkajan. The temple itself is a renowned tourist place. As we flung on the premises of the temple we saw a white furry rabbits, yalks and lamps posing for photos with some tourists. We learned that they were photographed on a rate of Rs.10/-. Budding models!

After returning from Hadimba Temple, we entered a movie- the very famous Bahubali. First time experience of watching a movie in a non AC theatre , but gave an unleashing feel of the chillness . At 1.30pm, when the movie finished we could see that eateries along the road sides were active.

The next day. We were supposed to enter Youth Hostel of India by noon. So we wailed away time in the hotel that we were staying till noon. Couple of days’ stay in the hotel had made the chef our buddy and hence we took the liberty of entering the kitchen to see the making of chappatti. The man showed us the preperation of chapatti and aalu jeera. The chappatti was puffed into 2 layers without fail each time it was baked in the flame. I remember how we would celebrate the puffing of a chappatti in my house in South India were chappatti, the adopted “ healthy food habbit” was beaten, thrashed ,rolled and finally spread to not-so-circular shapes.

YOUTH HOSTEL ASSOSIATION OF INDIA is situated in a place called 15th mile near Manali. To get an entry to  Chandrakhani Pass it is mandatory to attend a course conducted by the YHAI. The course is nothing but a tracking of your physical and mental well being.

We were asked to provide Medical certificate and a copy of Aadhar card. We were then given membership for the course.

We were allocated a tent. The base camp was occupied by about 150 people. In the evening sun, when we were served tea and peanuts, some of the campers were engaging themselves with games like volley ball and tennis.

The campers gathered in the ground to enjoy camp fire. Music and dance were played. At 7, dinner was served. Unlimited Rice, chappatti and vegetable curry were served. 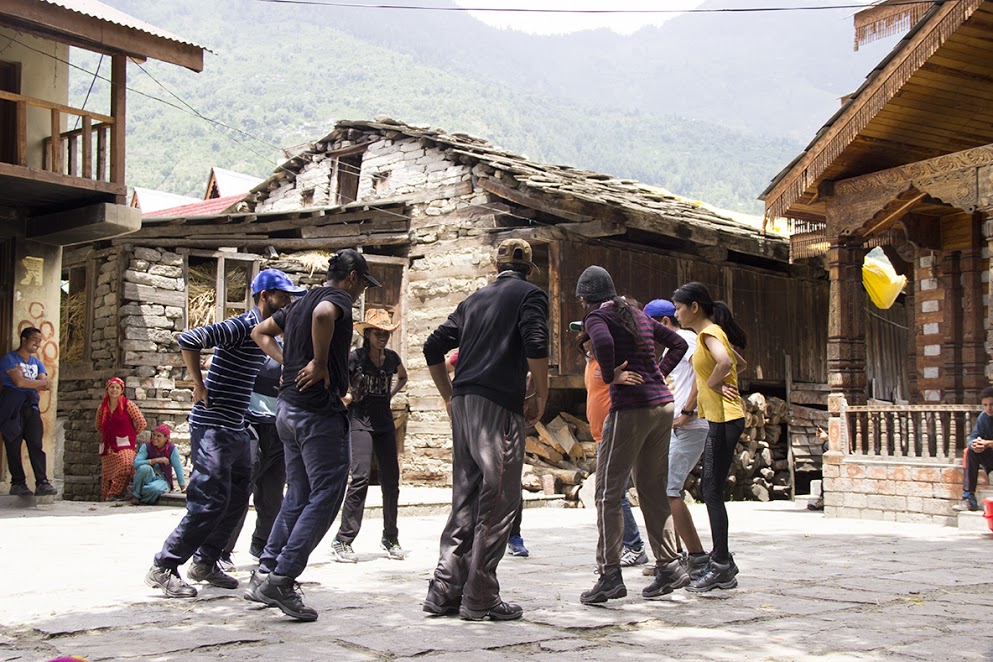 Each day a team of 50 people were sent for trekking. The team members are then issued a certificate on the successful completion of the trekking. Certificates were issued amidst the campfire and the joy was celebrated by some events. The team that went the previous day were issued certificates and the over joyed trekkers show cased a few programs like dance, music and short dramas.

Before going to bed, we were provided by a cup of boost and then we were given sleeping bags. Sleeping bags prevented the chillness to a great extend and that prevented my legs from kicking the fellow campers who slept close by.

At 6.30 am, we were provided garam chai. A warm up session was introduced to the campers. From a boy ranging from 15 years to women in their early 60s were enthusiastically doing the exercises. Let me mention here that many government employees of higher rankings were present in the camp. All of them wanted to give a break to their busy schedules and gallop fresh air of rejuvenation. Each time I saw them, my brain, for some reason gave a hyperlinking to Robin Sharma’s “The Monk who sold his Ferrari”. The campers also consisted of couples who were romantically involved, newly married couples, friends and of course, a few loners.

The team who were setting forth to that day’s expedition was given motivating send off with other campers applauding and throwing cheers.

After finishing breakfast, we were taken for a preliminary test of trekking that involved a walk of 14 kms through the woods. A break was given on every 1.5km. During the break time, we would gather around the two guides who accompany us and exchange jokes and information. Hese relaxing time set an oppurtuinity for the campers to talk to each other and get closer. It was fun to hear that there were about 12 couple who got married after attending the camp. No wonder! 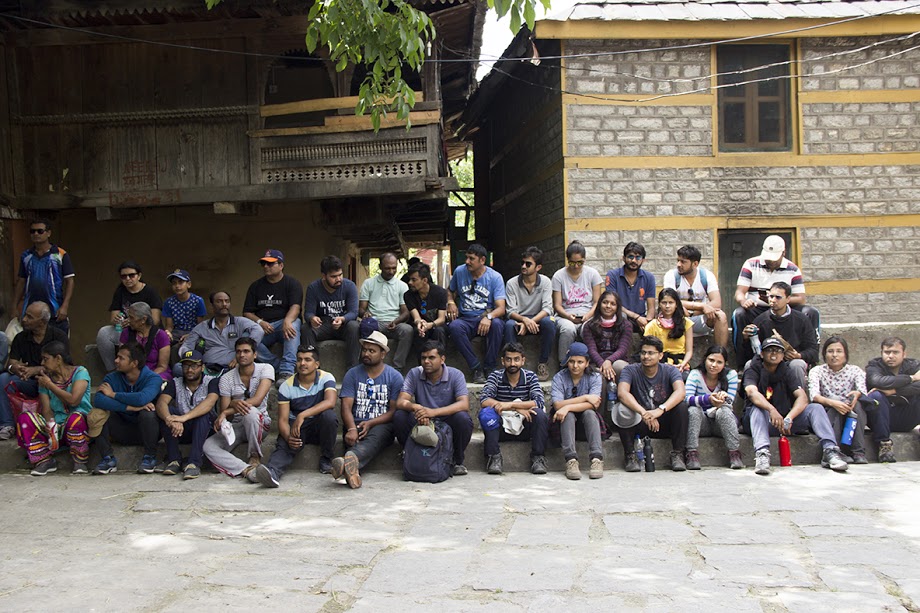 Continued in:  Manali adventure: The awesome experience of Mountain Rappelling