It was a long hauled plan. It was even more important because last time the plan was cancelled at last minute and I had to waste a four day holiday at home. So to make it happen and make it happening was amazing.

I’ve never taken leave on the day of travel. Because I would feel like it’s a waste of leave. If I take leave I plan to leave the previous working day. So this was special one. I had some work in the morning so the guilty pleasure was filled to the brim. In fact the whole trip was a guilty pleasure one. As one of my trips had got cancelled I had lot of leaves remaining, plus it was the year end so I let go everything and start afresh in the New Year. So Friday leave was the first of it.

Wasted the day in a lovely manner by packing, watching TV, FB etc. and started pretty early to the central. Still had to shell our multiple*x fares in cab. The roads were busy as it was a long holiday but surprisingly Central wasn’t. As I travel only on long holidays I was surprised that there was very less crowd.

Once in Central we met up with my relatives and logged in to Rail Wi-Fi to check in another new place. Bhuvaneswar Express of course was crowded but not as much as our last time so it was fine. All of us got tickets together in the same coupe so it was fun. We finished our packed dinner within few minutes the train started. It indeed was awesome.

We met with Krishna, friend of friend who in fact designed the whole trip excellently for us. We quickly settled in an Ertiga and Alto and checked in his penthouse. He had in fact arranged two of it but one was big enough to hold 7. After quickly freshening up and having breakfast, not to forget the excellent filter coffee, of which the taste still lingers in our mouth, we kick started our tour.

We started off for a long journey to Ryali Sri Jaganmohini Keshava Swamy Temple, the route to Ryali was beautiful, and we could see Godavari on one side throughout the journey. There were also shops selling Andhra’s famous dish, Pootharekulu almost throughout the journey. As I have had it multiple times since I have an Andhra teammate I wasn’t interested much. Towards the last part of journey we saw beautiful rice fields. Finally coming to the temple, it was a small but famous one it seems. Severely reminded us of Hayagreevar Temple in Chettipunyam. The priest there insisted us to have lunch so we waited for a while for biometric test and finally had an excellent lunch. In every trip I end up getting food in at least one temple. One of the priest also made sure that we understood the history of the temple by making a passerby translate the story from Telugu to English.

Opposite to the temple was Uma Kamandaleswara Swamy Temple, another temple rich in history. More interesting than that was the Ayyappan Temple behind it. For the first time saw a black Ayyappan deity.

Post lunch we informed Krishna about returning home. He said he’d have the lunch parceled to our resort so that we can have that as the dinner. So in the evening we started off around 4 PM to Pattiseema. Thinking about Krishna’s filter coffee we were searching for tea shops. Luckily we got an excellent tea shop. My uncle had two teas instead of one.

The boat journey from road to Sri Veerabhadra Swamy Temple was brilliant. We shot few sunset photos and took a long walk to temple. The temple had only us inside and every priest in front of every deity insisted us to say our Rasi, Natchathiram etc. So that took a lot of time but I was amazed by the dedication of the priests. Especially the last one, in spite of it being the closing time and only us being there. By far the most dedicated priests I’ve ever seen. And my most favorite place of the all.

The return journey to boat was quite an adventure as the son had started to set and in few minutes it became dark. On top of it the boat got stuck and we were stranded for quite a while which was fun. Finally we reached the resort and had an amazing dinner and sound sleep.

Highlight of the trip is the Godavari cruise. That’s why people throng Rajahmundry. So as expected it was crowded. From our resort to the cruise we had to take two trips because it was a small car. We reached the place on the dot. 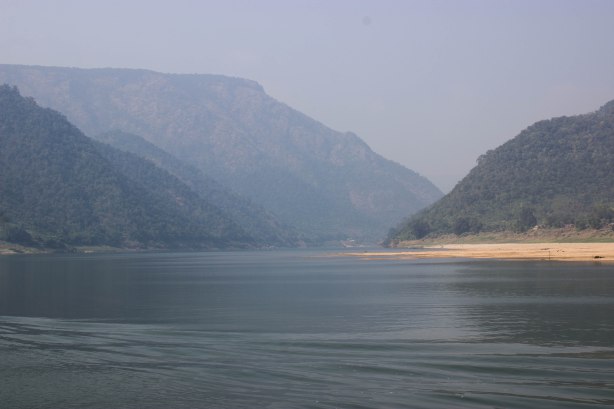 As soon as we entered the boat and settled in the best possible seat we got our breakfast. Idly, Vada and Upma with Upma being the best. Within few minutes the irritating cultural program started. One bro tip. Never sit on the side which has speaker. My ear pained one whole day due to high volume. The cultural extravaganza was an absolute disaster as we couldn’t understand the language and also there was a constant fear of being called on stage. Meanwhile my family was being humiliated.  So I sat on ground floor for major part of the day except while having breakfast and snacks.

We ordered extra non veg items like chicken, fish etc. which was decent. But I liked the veg items even better. While returning we got down at Perantalapalli which housed a temple and interesting variety of bamboo items. I’d have loved to buy them but didn’t as I couldn’t maintain them.

Again while returning I went downstairs as soon as cultural program started and sat there enjoying the sunset. But the journey was a bit stretched than expected so by the time we came out we were all dead tired. But it was such a relief to see our driver waiting for us. I could see the joy in everyone’s face. From there it was a nice long journey to Krishna’s house. By far my most favorite car journey of the trip was that night. Everyone were tired and happy and felt that the trip was totally worth the money.

But the best was yet to come. We knew that we had dinner ready but didn’t know that it’d be a seven course meal. Every one of us hogged like hell. There were so many side dishes that I stopped eating rice and had one side dish as side dish for another side dish. And then the dessert so it was beyond full. We ended the day with a quick visit to Godavari river and a quick round of Kovvur sightseeing.

It was a very tiring morning to get up but somehow we managed to get up and start by 9 AM. We had sample Pesarattu which was the best I’ve ever tasted. Whatever we get in Chennai are not the real ones. I understood only then. The sample one was enough for us to survive till lunch. We set up around 9 AM and went first to Rampachodavaram falls. It was a nice little falls and to our advantage we had the falls all for ourselves. Most of us took bath and got few photos clicked. We had amazingly unique Chicken Biryani (nice and spicy) and meals. Both Veg and Non Veg options were awesome.

Next we went to Jalatarangini waterfalls, another waterfall in Maredumilli but it was more crowded and risky. We did best by taking bath in Rampachodavaram. The road to the falls was awesome with forest cover. Also there was a boating point which was picturesque. While returning we stopped there to take photos and also bought Bamboo Chicken en route.

We reached Rajahmundry around 7 PM and went for a whirlwind tour of the city. Bought the paper sweet famous there called Pootharekulu and had all three types of Rose Milk along with Chilli Bajji. Chilli Bajji would be my pic of the day with a lot of flavors.

Tension started to build up as we had only very less time to catch the train. Also the restaurant we went was crowded. After a lot of yes and nos we finally opted to parcel and everyone except me returned home. I took the parcel and went home. By then the luggage were almost pack. We finally bid goodbye to Krishna and family for awesome hospitality. Had dinner including bamboo chicken at the railway station. The train was late by half an hour and as I was dead tired I slept immediately.

I even took off the next day. Another first!