This is a continuation from the former article, Trekking through the Himalayas: Story III 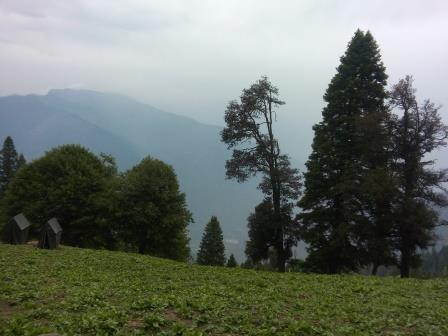 All group members of our camp gathered and joined our guide to continue our Himalayan expedition with bravura. The camp members along with the guide and his helpers moved on for fresh and new experiences. Within next five minutes of walk, the plain landscape ended which lead to a slightly slanting terrain. We were able to see the other end of the channel from this side itself and we walked along the left side which had beautiful green meadows with pine trees behind. The other side was quite steep. We continued our trek through the channel and when we reached a certain extend, totally exhausted, the guide told us about a steel pipe laid by the water authority which went beneath the terrain. We found on the pipe, cracks through which water was leaking and spluttering out. The guide suggested that if needed we could collect water from the leak. As everyone was tired of thirst that we hardly had drinking water remaining in our bottles, we rushed towards it. The water-spray was quite feeble and the task was not that easy as expected. Somehow,we decanted sufficient water and moved forward. 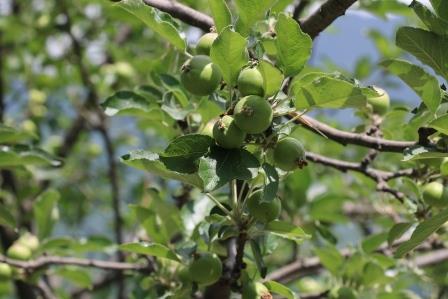 Among the people who accompanied us, some fellows took out a stove and started preparing tea. We couldn’t make out whether they were members of trip organisers or not. But soon we got to know that they were sellers from outside. They had tea, soft drinks, snacks, packet foods and also bread omelette. We ordered four tea in luxury. The unexpected rendering of tea meant so refreshing and the new taste of the tea was complimenting the cold weather. But they charged double the original. As our pockets were much lighter we all controlled our expenses on refreshment. Even though, the hot tasty tea seemed priceless for us in that cold weather. 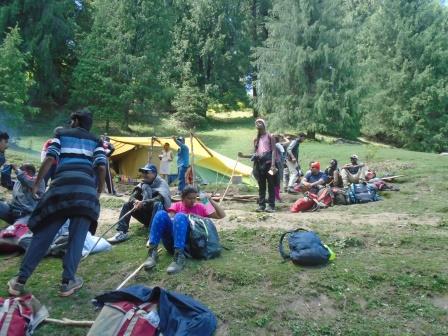 The two dogs which were accompanying us went around sniffing and created the fear of an attack. We sat as if we were rocks without any movements. But dogs were quite merciful and friendly. The ‘chaiwala’ was successfully continuing his profitable business there and we turned towards the scenic beauty of surroundings and sat on a grassy area. But later when we stepped ahead to explore more beauty, it was horrifying to see a deadly trench before. We instantly deserted our desire of stepping down from there. In between , two or three selfie freaks rushed over there to capture their pictures. But they were discouraged by the guide as nobody wishes to have any accidents or casualties through out the journey. There was a fine blow of breeze that embraced us like a lady love while sun played the villanous role by hitting us by its strong rays. 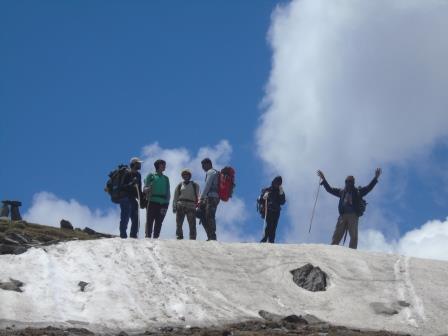 We paused there for lunch for half an hour. After that we were, all set to continue our pedestrian journey and for about ten minutes later, we found ourselves on the top of a mountain. We understood that we were entering the other part of the mountain as the shades of the nature lay entirely differed from that was before. Here, we could not find any trees. Not even a greenish tinge caught our sight for a long stretch. It was a long lying mountainous land with not much scary steeps ahead. Within a few meters walk, we started to experience muscle cramps. It was sunny and the weary walk was badly boring. We all walked arduously as if we had no other way than moving forward very obediently. It was interesting to watch people walking in a row silently like ants , behind and ahead us even in that boredom. That was the only leisure we had then. Far away, in the direction they were walking, we could see stretches of greenery. After a few minutes we saw shepherds with their cows crossing over us. We reached our next resting place after a one and a half hours unenthusiastic walk.

We had a little bit of relaxation there and carried over through the same barren land and reached new green-lands in the valleys. In continuation with the green-lands are thick woods. As we were going on through the greenish bushy area, our guide yelled out waving his hands in the air . When we rushed to him with great enthusiasm he pointed to a picturesque sight. It was really amazing to see small hilly columns which were greenish and were like stacked buns. 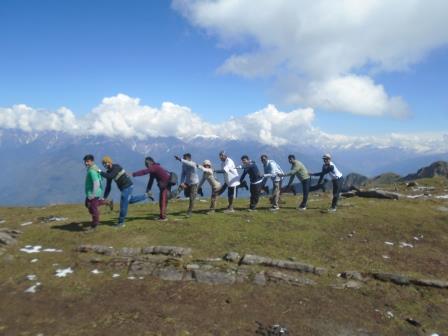 We had our packed lunch waiting for us. Roti and Dal fry was packed in the entree which was little woeful to consume as it was not hot and fresh. The mobile cafeteria started functioning again with tea and sundries for us. We ordered for tea and finished our packs. The tea gave a brand new refreshing mood . We ordered two bread omelette too even though it was a costly affair and offered it to the two doggies which had accompanied us from long. Some nature lovers moved on to the bunny hills of more lower levels. It was a chancy task for us and so we pulled ourselves to our arbors enjoying the sceneries. All at once my eyes struck on a small stream which seemed like a jingling anklet on the mountain foot. Wow, it was an enthralling sight! We spared almost one hour there for lunch and loose talks and got to move along.

We went on for another one hour and we climbed a supine curve, saw that the dark, arcane woods are much closer. The journey ahead was through dense forest covering bushes, small pine trees, other short and long trees densely grown. There were small trenches in between and we cautiously moved together for another half an hour. Even though it felt scary to travel through such dark forest, the shades allowed small streaks of sunlight which kept our spirit high to move forward. 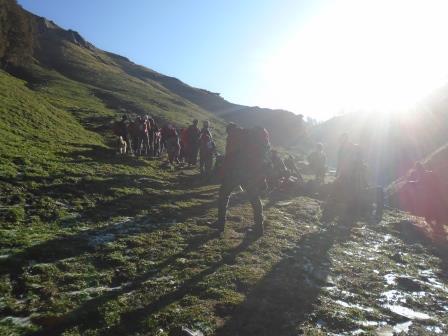 While continuing through the forest for about half an hour we were forced to pause by the frantic beauty of the woods. All of us found relaxed and the cinematographers of our group took their cameras to snap and shoot the wild beauty. Meanwhile, our guide advised us to hurry up as there was no shelter in the woods to halt if it rained heavily. We switched on our journey with our bags from a higher level of land to a valley. When we descended down, we started feeling being hit by stones . Our curiosity and excitement over bowled when we realized that those were hailstones.

The expedition was a ‘dream come true’, and we envisaged snow capped mountains, risky paths, dangerous cliffs and all other adventures one expecting mountaineering. But we were not lucky enough to see any snowy environs. The drizzling hailstones wiped off such miseries too. Hailstones followed by heavy rains made our journey too miserable but we had to go forward despite of all difficulties. We moved one behind another carefully to a height of slope. There were two trees standing one beside the other with thorny bushes entangled on the trunks. We carefully walked, pushing the thorns aside with coshes that we had in our hands.Adventurously crossing the thorns, we crossed over a steep pine forest and then came over to a red soiled landscape with ups and downs all through the way. From there, after long hours of walk we got to see clear blue sky evidently. This way lead to a man made path, all ruined and dirty. 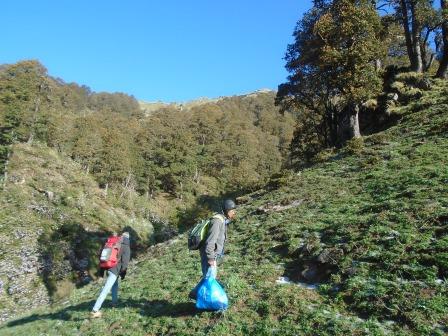 Suddenly I heard our guide saying about something aloud so seriously. He was far in front of us and when we slowly reached beside him he pointed towards something. His index finger grabbed our sight to a one room temple who’s entrance gate was shut. When we inquired, we understood that it was the world famous ‘Mount Nag’ temple . The temple functions only for a once in a year Pooja preceding a grand festival. We were informed that the annual festival flagged off just one week before we arrived. It made us feel disappointed to have missed such a grand festival. Nevertheless, it was a moment of divinity for sure and conquering Mount Nag was a great blessing in my life . Not everyone gets such gifted moments in their lifetime. It was a proud moment which I could cherish in my life all through.

Mount Nag exalted our hearts with eternal ecstasy. According to our guide’s description the deity of Mount Nag is the super powerful Lord Naga and the Poojas of the temple could be offered by no one other than the priest who belong to a specific local community. No others were allowed to enter the temple complex or premises at any cost. When we unknowingly stepped inside the brick barrier, the guide shouted loudly.

The name of our forthcoming campsite was announced to be Mount Nag itself and so we concluded that our abode is around the corner. The journey gifted a great deal of satisfaction and it was like a travel through the intellectual and spiritual playgrounds of mother India.

As expected, after a short distance we caught sight of the board of our campsite. The site covered 10 m of area with eight tents altogether, of which one was set apart keep our belongings and other ones for campers. Pantry and sanitation facilities were provided. The scenic beauty around was mesmerizing with soothing climate. The camp leader blew his whistle for falling in. The handsome chap served us a welcome drink and briefed about the facilities they offer and exhorted us to avoid bathing, as scarcity of water was intense. He also gave us guidelines for our safe and comfy journey ahead. Smoking and alcohol consumption was strictly prohibited in the camp premises. In that pleasant environment we set a campfire, with all campers enjoying that joyous evening. I was blessed with a sound sleep that night.

Continued in Trekking through the Himalayas – Story V