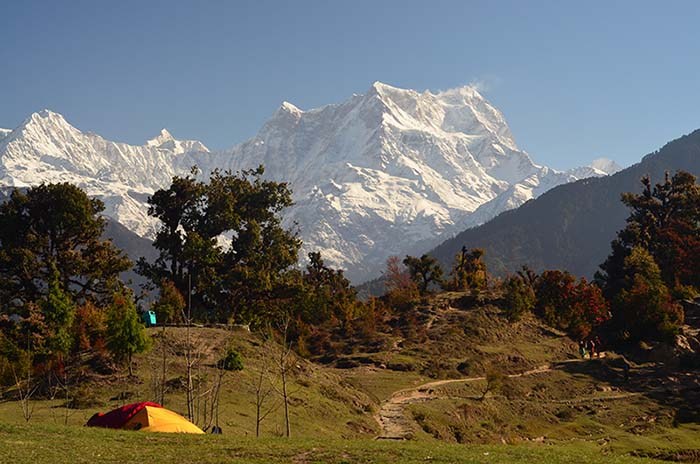 While we started from our camp for Himalayan adventure trip, we were provided with a list of items to be carried out for high level trekking- a pair of goggles and an UV polarized glass to escape from ‘White Out” phenomenon where the surroundings will be sprinkling silvery. If observed with naked eyes, it would be stinging. Sun blazed gloriously above, making everything shine under it. Our guide told us that we had reached our dream destination. The winning for which we had struggled for; ‘The Chanderkhani Pass’. We were at the peaks of excitement and pride that we had conquered one of the highest spot of Himalayan ranges adventurously. We had 1 hour of amusement there. The clicks we had there was the most stupendous pictures among the entire collection of this trip. We slid down through the slopes on the safer sides.

We made quite a lot of merriment, riveting our friendship with all the 50 co-campers, and all the more regaining our childish aspects. We had our lunch and moved on climbing down. It was a matter of disappointment to move down from that beautiful place which we had managed to reach after a lot many struggles all through the way. Turning back, once again waved hands towards that heavenly place with distress. ‘Chander Ghani’ was calling us back each time, when we looked back.

After a small length of frantic walk was another peak, much higher than the former, stood before majestically. It was on the other side of ‘Chander Ghani Pass’ where too we had a half an hour’s pause. From there looking towards Himalayas, were a stretch of pointed tipped peaks striving to touch the skies, all silvery, covered with snow. The sceneries were never word bound to describe and I felt myself that this is just the beginning of the story and there’s much more to unwhorl. We took photos, had light sundries and other refreshments.

After, we resumed, climbing down. Climbing down was a hard nut to crack. It needed more time and effort than the other. There were many instances where we had to walk through snow covered paths which was slippery. According to guide’s advice, we poked the coshes into the slanting sides and affirmed heels carefully twice onto the snow one after other. Finally a small area of land was visible tempting us to dash over. But soon again the snow cladding began. The 3 guides who were with us fenced themselves every time when the mountain slides seemed dreadful and steep. They were seemlessly dedicated in helping us. 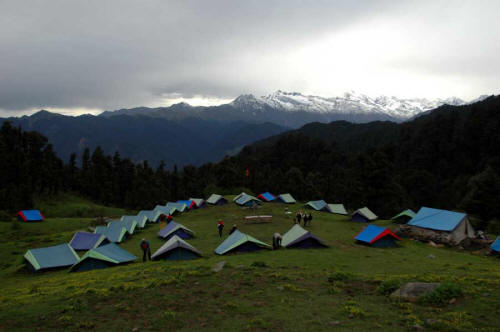 We headed on a few distance where layers of snow gradually started decreasing and finally terminated. We were able to move on with ease through the normal mountainous land. Distantly, 4 or 5 mountains after, saw a few tents raised. We thought our next campsite is almost there. But leaving us desperated the guide said that those belong to private trekkers mostly from abroad. They were much facilitated than ours. As we proceeded a little more the ‘White Out’ phenomenon vanished and sky darkened leaving behind chances for rain. But as we had crossed the fear factor, the deadly paths of ‘Chander Ghani Pass’, we were not much frantic and turned agile. We could see traces if greenery down in the valleys after some walk. It was all sure that we are moving closer to the valley.

We later reached a plain ground, crossed over and moved through the shades of Rhodo Dendron tree. Melted snow flowing down as rills was interesting. As we were just about to reach our tents, dropping down of hailstones started which was the preliminary signs of rain, followed by the rain shower. We rushed down to our tents but the slippery slope tented us to slow down. Somehow reached our tent, dashed in. It was a temporary one made by fastened tarpaulin spreadsheet as roof and barriers on all four sides to restrict water from flowing in. It could hardly occupy 50 people. As mentioned earlier, it was a temporary shed arranged by our tour oganiser before our campment since we had a long walk. That was our lunch place where hot tea was provided which was extremely refreshing. My pack smelled nasty by that time, so I skipped my lunch. Supply of drinking water from the hill top stepped up our happiness. They also served light bites.

We continued trekking by 2.30 pm. The rocky land was dampened by snow and mud making us move slow. As we proceeded heavy trunked trees were visible all around. Arrow marks indicating the direction on trees and rocks was helpful to move on without guide’s assistance. But being a steep mountain side, there were areas where we had to sit and slide down. Also, like a past experience in this journey here too we had to walk through an arid stream for about one hour. The environs around were beautiful but similar as before imparting no new excitements in us. Almost after 3.30 we saw the board of campment. A half kilometres of walk from there reached us to the new tent. We 14 friends occupied in one of the spacious and clean one. The camp co-odinator unlike the previous one was a strict fellow. We were served with a welcome drink.

It was fairly sunny outside but sweltering. The mountain side behind the tent was horribly deep and frontage leading up to the peak. The surroundings were scenically beautiful, but we were busy searching whether our mobiles were in range of towers. Mitigating our doubts the mobiles were in coverage limits and we got indulged in contacting with our dear ones. Sun blazed for about 6.00 pm and all our wet clothes got dried up. As usual dinner was provided in time followed with hot boost milk. After dinner we soon winded up to our beds and slipped into tight sleep dreaming about the magical scenes of the nature all through the way we had traveled.

We woke up to a chilling morn. After morning activities we had 2 to 3 cups of hot buoyant tea and warmed up our palms with the same. By 9.00 am we finished our breakfast , took our pack lunch and were all set, to resume the journey. A see off journey from the cradle of Himalayas. Unlike any other start off, this was eye-wetting. It was heartbreaking to say goodbye to our campmemt, co-campers, guide’s who accompanied us, camp co-odinator, the picturesqueness of nature and obviously to ‘The Great Himalayas’ with a lump in my throat. Tears veiled even closer sights . My 50 companions whom I might not meet any more in life are about to leave in short time. We hugged and petted each other. Arduously we had a final turn back, and slowly left the place.

Reminding the previous environs, we moved down through deep pine woods, green turfs, saw Himalayan peaks far away,…all the sights were recurring. In between, we took enough rest. Down the way we saw numerous private trekkers and foreign tourists from different parts of country. A group of young trekkers from a school joined us to climb down. We had light refreshments in between. By 1.00 pm we recessed for our lunch. After 1 hr of rest and taking snapshots in the pine woods we proceeded. When we headed on for another hour we could see signs of village ; local public, tar roads, horns of vehicles etc. We had to trudge down another 5 kms more through the hilly greens to reach the base camp. But as we were worn out, preferred to travel by taxi. We traveled 40 kms by road to reach our destination. All the trekkers gathered together at the base camp and seceded emotionally saying adieu to each other and wishing all success in life.

While leaving I started analyzing a question raised against me by my dear ones; “What do u gain with this expedition”. It was unanswerable for me then. But now, that I have won my expedition, I am ready with an answer to the world. “I have beaten up my fear of heights and also have gained peerless proud moments in memories to cherish until my last breath”. Before stepping into my coach I once again looked at the indomitable “Himavan” with a salute……..