Trekking through the Himalayas - Story VI

This is a continuation from the article, Trekking through the Himalayas- Story V 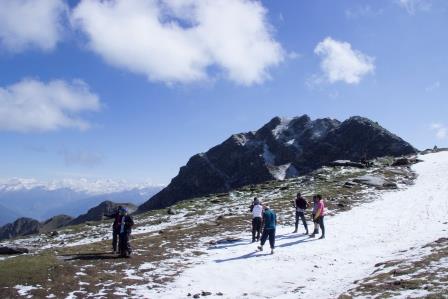 I trudged solely through the shower of rain, spotting the sign boards to track our campsite. Distantly, near a scarp, the encampmemt caught my sight. The camp-sheds were situated on a plane adjacent to the scarp. The camp premises were almost florified with a herb resembling Water Hyacinth, dancing with the breeze. I dashed towards the site howling and screaming as a sign of relief.

The path towards the campsite was muzzy and large masses of cow droppings swamped all around. We struggled to make out our way screened by dense foliages. Somehow managed to get in there with soggy clothes and dirty boots. We cleaned our dresses and foot wears, and occupied our tents for resting. We did not find find our camp coordinator there but hot tea was arranged. His anomalous absence was inadmissible. I was tire-torn and in a miserable mood, and preferred to stay on my bed. All at once an out break of noise stuck my ears from outside. One of my friends too was calling me out to see the hue and cry. I got out of the shed and saw, afar our tents, down from the valley, a heavy clouded mist moving slowly towards us. It was a soul-stirring visual which invigorated me, carrying away all dispirits. All of us screeched and yelled with utmost thrill. Soon it enveloped us obscuring our sights. Within a few minutes the fog moved away. I felt like the mist wiped off all my wanes gifting me a hale mind and body. So I accompanied my friends with camera and moved to the lop sides of the mountain. We sat on the toppled tree trunks and captured scenic beauty.

The glorious sun above started spreading it’s warmth. So we changed on to lighter clothing and set apart our heavy boots. We vivaciously moved to much farther surroundings for our enjoyments. We had five tents in Obla Tach along with pantry, and on the upper land surface just above was a shed for lodging luggage. Beside the shed was a slope with a shallow stream running at the end. A pipe was dragged to our camp to deliver water for washing and sanitation purposes. Subsequently was another slope with giant pine trees, much of them toppled. Far away, we saw Great Himalayas stood silver scarfed. Beamed with joy we ran over to the grove, crossing the stream. Some sat on tree trunks while others performed their talents. Meanwhile, a few was talking about the local men who approached offering to charge our electronic devices at a rate of ₹100 per device. It seemed helpful as there was no electric supply in the camp. 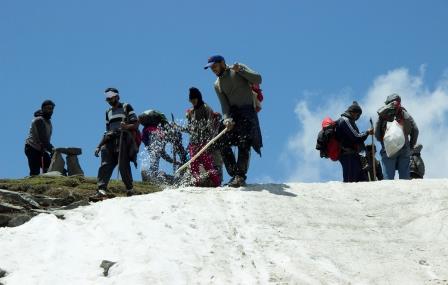 I was overwhelmed to conquer such heights in my expedition very adventurously and industriously. But my experiences were simply apart of the daily life of manhood living there. With this realisation my ideology started working, thinking madly whether our life is enigmatically controlling us or we living beings are controlling the universal enigma. Without disclosing my intellectual thoughts to anybody i joined with my friends their enjoyments. The sky showed signs of darkening but we were at the peaks of merry-making wished night to stay away. By then we were called for dinner and had to withdraw sadly. It was only at that time we got to see our camp leader. Post lunch we had a bonfire with music and dance. Hot boost was also served. After we returned to our respective campsheds expecting to have a sound sleep. While others slipped down to sleep, some of our camp mates from our shed moved got out with their cameras. Mee too accompanied them to enjoy the nocturnal sights outside. The sky with star compact galaxy mesmerized us. My friend captured the stellar beauty in his camera. We had a blessing of fortune to see an artificial satellite moving in the sky with our naked eyes – proud moment !!! It was almost 11.00 O’clock then and our camp leader came to us as he felt awkward to see us outside in that late night. Such practices were not encouraged in any other camps. Firstly, he gazed at our activities and after realising, he advised us to get back to our beds without making it too late. Night was still young !!!

The streaks of morning light was wakeful and I looked my watch for time – half past five. Sun has arisen too early but, l remained drowsy. I switched back to a short nap again and woke up only after seven. Outside, l saw dewdrops on foliages sparkling like diamonds. The background sceneries were clearly visible than the previous day. Instantly my eyes stuck on a board with ‘Hot water for bathing’ written on it. My heart revelled as it had been five days since l had a bathing. Eventhough not too soiled, l badly was attracted and had an economic bathe at a rate of ₹ 50/ bucket along with my morning activities. It was inevitable to have a shower in the morning for a typical “Mallu” ( Keralites are known as mallus) like me. After, we had breakfast along with steamy tea.
Unlike previous day, camp leader was present early morning itself. He was a very genial guy, well experienced in coordinating trekking programs and showed great patience in rectifying any kind of doubts related to mountaineering. He gave us a vignette about that day’s journey. According to his briefing, the forth coming journey was a heedful one. He told us that a rain , which probably would shower will be ominous.
We moved on with a silent prayer inside our hearts, knowing there’s none other than ourselves to guard our lives. We started climbing from an ascend, headed on eventhough slight physical discomforts were experienced and reached our first resting place. We all regained our energy levels within a few minutes of rest. The climate also was exuberant. Few fellows including me demonstrated a couple of yoga postures and won applause. Later, we were served with buoyant tea. We continued with our journey through the ascend where we could see only countable number of trees of a rare species named ‘Rhodo Dendron’. Acres of hilly turf was seen around. Sufficient reposes were taken in between to regain our energy levels.
The sun glazed above our heads portending noon. We came to an ovulus hilly grassland resembling a green baloon.As hunger striked badly, we stopped there for lunch. Beside, we saw a small lake with water. We were dazed to see a water body in such a highland. Horses passed by carrying eateries and gas cylinders and we supposed that they might be going to our campment. Post lunch we set off again. We continued through similar environs without much difficulties but the slopped areas afar were evident. We had to be very alert while crossing that deadly scree. It was relieving to see that the area ahead was smoother with planes on either sides. Moving a little ahead we found a steep mountain upright with an ‘S’ shaped path twining upwards. We were able to see people budging through the way leaving distance between each other to avoid collision. We walked very slowly as it was a ridiculous steep and some how managed to cross the craggy path with great exertion and came over to a wide meadowland. It was our next resting spot.
We started from there half an hour after. Every time when we walked, preferred to be together. But now we have to change our practice because the pathway was horribly steep and stony, and many of us lagged with our speed, thereby separated from our chums. I had to walk with two of our co-campers not much friendly with me. Our prayers were in vain and it started drizzling by then. The path was badly slippery and we carefully stepped ahead. One of the two fellows had a normal track shoes worn and it dropped him down. He was unable to move of pain and sat on the kerb. I had to walk alone leaving his friend with him. Rain showered more heavily and I strode forward carefully looking for a company. Unfortunately I could find nobody by the way. The passage was scary with one side abysmally deep and rainwater was flowing down like flume. It was a wretched situation and I thought of my family. But soon I regained my concentration in trekking, vigilantly moved ahead and reached recess area.

Continued in Trekking through the Himalayas – Story VII