We took repose in an uninhabited open place where the ascend terminates and slope begins. It was a great relief to have a resting time after crossing a terror striking path. All of a sudden the camp leader hastened to resume the journey as there was a probability for torrential rain. We hurried down the slope disregard of rain, eventhough it was tough to move on. Rain water was flowing at our ankle levels and we walked forward poking with staffs to find the obstacles before each footstep. Many of our fellow men tumbled down through the slope. No serious casualties were there as it was not that fearful one. My cautiousness saved me from any accidents. I also thanked my water proof trekking shoes for the same and it was only then I came to know it’s great usefulness. 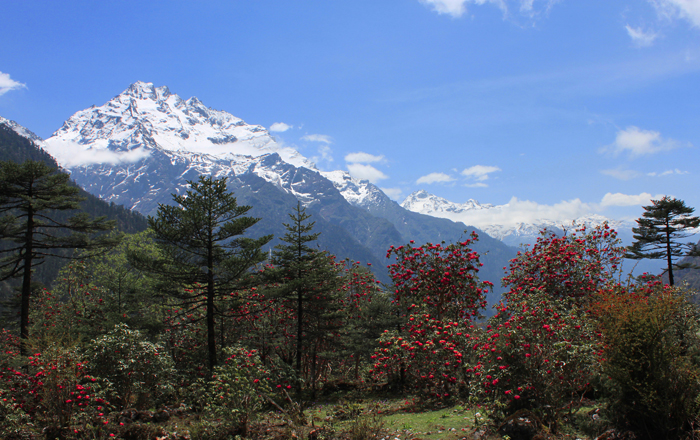 The beautiful tree, ‘Rhodo Dendron’ on either side of the path imparted a visual treat, but we were unable to relish the beauty as the ground was marshy almost covering our shoes and we had to step ahead carefully. We continued with that weary walk for about 200m along. The board indicating our next halt station was seen. The rain, by then had become more heavy soaking our clothing and foot wears. It was shivering cold.
A steep depth towards the foot of the hill which we had to cross over was disappointing. The path was slippery due to rainwater. I grasped the thick roots of trees and slowly moved down. By God’s Grace, I somehow managed to get down. That was the most difficult part of the journey as of then; I felt.
The slippery slope ended with a rocky surface. We proceeded down through the craggy area warily holding on to the branches of Rhodo Dendron. A rill flowing below caught our sight. We washed our boot soles and then crossed the water to the opposite shore. There was the board showing way to next campment. It was a great relief in the wearisome walk. While heading on aiming our camp, the path was similarly craggy but unlike before, fallen down hailstones had made the way more slippery. It took almost 40 min of walk to reach our camp. We were enthralled as the path leading to camp was teemed with snow. At last we reached our place adventurously, with hearts filled joy. The roofs of campsheds were covered with snow. We occupied our tents. Twelve of us had tight amity with each other by then and every time we shared the same tent merrily. We changed our shoes and clothing and had our welcome drink ; steamy strong tea which was very much palatable in chilling weather. After relaxing we got out of our tents to enjoy the frosty sceneries. Rain had stopped by then. Snow, fallen over the sheds were removed from time to time. There was a rill flowing, a few meters away from our tent and the shores were lined with snow which slowly melted down merging with the flowing water. We captured photos of the picturesqueness of snow filled environs.
According to me that was the most exhaustive day. But when I sat back and analysed the whole expedition till then, I could apprehend that, the day I relished the maximum sweetness of the journey was the same. My decisions that helped me to reach my station without much fray made me proud of myself in that very moment. In the evening our food and hot boost milk was supplied to our tents. We were also supplied with thick sleep bags as the temperature would go down to minus degrees. The sleep bags worked well serving me a tight sleep. We had to wake up at 4.00 in the morning as we had to move on at 6.00. Next day we finished our morning chores and breakfast, took pack lunch and got ready to proceed. We had to cross the rill which was flowing beside the tents. With the help of coshes in hand poked the water depth and we carefully stamped on the rocks seen above the flow and moved ahead. Skyscraper mountains shielded the sunlight from reaching down making the path more wretched. Cold was intensifying. We removed our gloves and dipped our hand into the water. Ouch!!! freezing cold… 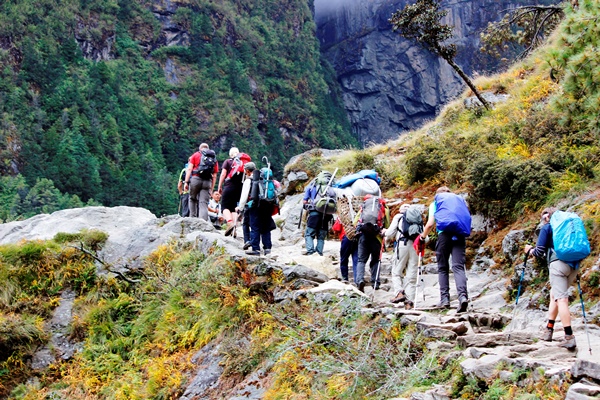 We went on for about one hour ahead through the mountainous land. While continuing with the tedious walk, streaks of morning light filtered down through the trees from the peaks of huge mountains on either sides. It was impetus for all of us. For me, by this, was once again proven that the ultimate energy source for every element on earth is the glorious ‘Sun’ itself. As we went up, the task became tougher and we need to be more alert to avoid accidents. We had to move through thin passages with disarrayed rocks which hardly had enough gap to move on very cautiously keeping off ourselves. The stream was passing through this passage. It was almost 7.00 by then, but sun was tardy in that trenched passage. We enthusiastically got around a scree uphill towards the streaks of sunlight as if we were just about to reach it. All the peers screeched out with happiness to get embraced by the sun rays. After one and a half hours of journey we reached our resting station.

Continued in Trekking through the Himalayas – Story VIII