Trekking thru the mountains at Manali : First day, finest experience

Continued from : Manali adventure: The awesome experience of Mountain Rappelling

The day of trekking.

After getting up at five in the morning, we enthusiastically had our breakfast and packed food for the day. The National Camp Head gave a packet of dry fruits and chocolates to every trekker as a gift. The eateries were energizers and calorie boosters that can be used whenever we feel utterly week. 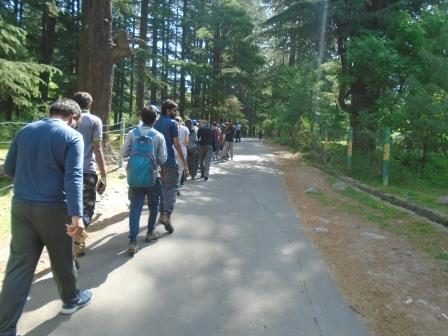 At 8 am we officially started from the YHAI campus. Near to hundred people who had camped there stood on both sides of a walkway through which the day’s trekkers ( our team) officially stepped out for the trek. Great applauds and greetings were shed on us which strengthened our courage and made us feel like heroes. This kind of seeing off was an official ceremony there.

A bus was waiting for us near the gates. It carried us to a plain terrain that laid between huge mountains. The travel took two hours. And as soon as the bus stopped the entire set of trekkers got down and stood in attention as were in a military camp. I saw a tea stall near by and went to have a tea. Other trekkers too followed me, breaking the ice. 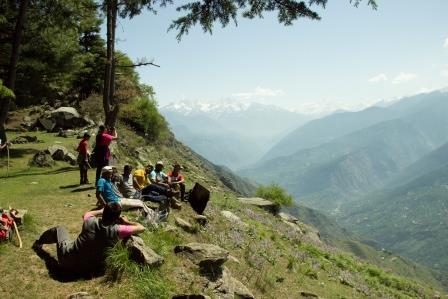 Official trekking started from the place. There were two guides with us. The path for trekking was well defined and had perfectly carved steps. Also, adjoining to it was a small pathway created by the regular commuting of cattle and the natives. By the time we crossed 200 steps, my legs started to pain. Muscles started to cramp.
The guide ordered us to take rest. There were small shops nearby. He had some aerated drinks. 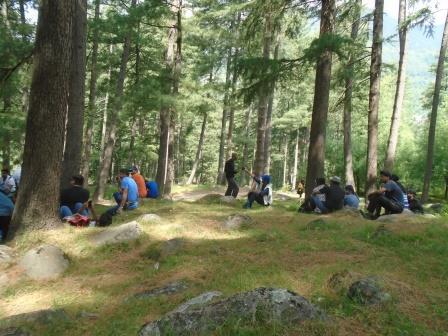 Since it was the first, our level of enthusiasm was at the top and hence we walked very fast. The entire trekkers formed different tiny groups. We were a team of 4 trekkers. We ascended with acute confidence of covering it the first. But when we reached a point we saw Mr. Swami waiting for the remaining trekkers. Later we learned that Swamy was a professional trekker.
All the team mates gathered. We unpacked our lunch and had it sitting on bare land. We could see horses wandering on the meadows. Too silent a place! It felt like we could speak to the Mother Nature standing there. 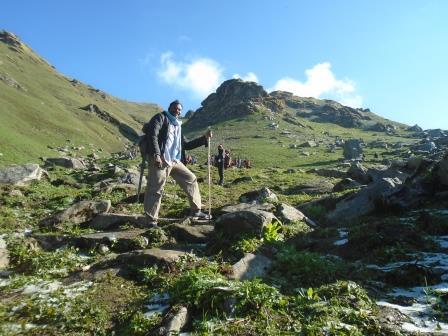 Finishing the lunch we marched towards Bijli Mahadev temple. After entering the temple, the guide advised us to sit and meditate for a while in order to get relieved from the physical and mental traumas of trekking.
Time for inner peace..
We roamed around the temple premises. We could see a Pooja happening inside the temple. We could also see Boodhar airport from far. Boondhar airport, which is a very small one compared to many other airports of the country, offers connectivity to Manali. 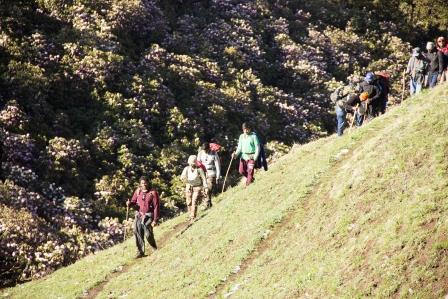 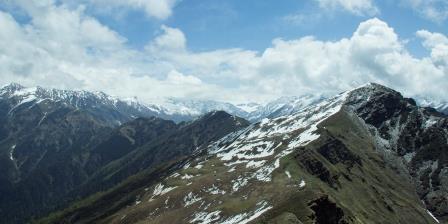 Continued in : Trekking through the Himalayas: Story III