Victim's voice - Breaking the silence in the amidst of pandemic
Studying abroad is an illuminating experience, having invested 5years of quality education in London with an ambition to pursue a promising career in the United Nations, I signed up for a program at United Nations Interregional Crime and Justice Research Institute in Italy. Since the Covid-19 outbreak, my dreams turned out to be the nastiest nightmare!
Multitudes were (some still are) mentally drained, devastated, disheartened, and panicking and I was not an exception.  In the initial phase of this pandemic, many lived in acute anxiety and the anxiety was more of a killer than the unseen virus itself.
A new layer of uncertainty for a significant number of international students arose globally after the Covid-19 outbreak.  Tutors and students were not used to the online environment and students were certainly not prepared for e-learning, either physically or mentally. Having invested a substantial amount on tuition cost for an in-person program that abruptly malformed into an online course was a huge disappointment and a defeat to the idea of yearning international exposure.
With a suspension of classes and permanent closure of the university, I was stuck in a 5 bedroom house all alone for over 5 months.  It was the most daunting and traumatizing experience I have ever encountered in my life.  Devastated of being called Corona Maffi for living in the (former) Corona Epicentre, hearing countless unnerving sirens of ambulances recurrently, absentminded and burnt the oven gloves and irrationally attempted to put off the fire – I felt mental agony and it was rather hard to feel optimistic: despite my mother’s buttress.
As Mr.Mahalingam IFS, Mr. R.Balasubramanian, former JAG, Legal Advisor to Indian Army, Mr.P.Wilson Member of Parliament, Mr.S.Prabakaran, Co-Chairman Bar Council of India, Ms.Kanimozhi Karunanidhi Member of Parliament, Dr.VRS Sampath, Advocate, Dr.Samuel Raj, Dean SRM University,  Dr.Ram Shankar, Standing Council Bar Council of India, Dr. S.Latha, Assistant Professor, University of Madras, and many others tried to repatriate me to India at the initial segment of the outbreak to whom I am eternally grateful – due to my ongoing commitments to my education I had to stay in Italy. 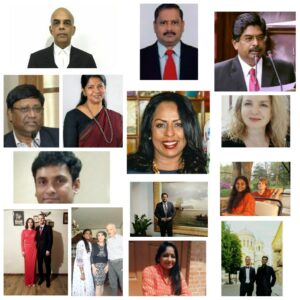 With my emotions at stake and loneliness being a killer (even in this digital world) I had an unknown and unseen harasser who tormented my lonesome life both day and night by ringing the intercom at my flat in odd hours – sometimes multiple times even at midnight(s).  It was awfully mysterious, I was in sheer fright and impulsively infuriated.
As I attempted to reach out to the Italian Police and other concerned authorities in this regard, my lack of knowledge of the Italian language caused minor difficulties initially and Mrs.Giulia Graziano, Advocate helped me a great deal and then came a few God sent special angels who unleashed mental peace in my heart and my mind.
Being thousands and thousands of miles away, Mr. Abu Tahir from Dubai (whom I have never met) not only rendered his moral support but also connected me to Ms.Rosita Bhagwandin a prominent and vibrant personality from the Netherlands. She instantly connected me to a renowned humane senior official from Rome, Mr.Dominco (name changed).  He instantaneously asked me for my passport details and my photograph and immediately forwarded it to the Carabinieri, (the national gendarmerie of Italy who primarily carries out domestic policing duties in Italy).  I wake up to have 3 most efficient officers of the Carabinieri at my doorstep who inspected my apartment and confirmed that there was no possibility for the harasser to break-in. They gave me specific instructions never to open the door and re-assured constant monitoring.  The act of the Carabinieri was bolstering of faith, functioning as a watchdog to protect to a foreigner like myself was highly commendable.
Meanwhile, Ms.Rosita Bhagwandin and her indefatigable conscience linked me to yet another official, Mr. Sangram Dhir who rest assured instant intervention.  In a nanosecond, I received a call and shortly a personal inspection of my apartment from Mr.Marco Sandano, Safety & Security Manager from the Interpol who game me perpetual solutions to demobilize the unknown harasser and gave hope to my pool of doubts and fright.
In the interim Dr. Binoy George, the Consular General of Milan himself very kindly called me and uttered words of optimism to a troubled and fretful loner like myself.  His prompt intervention led to 3 efficient Italian Police who further probed into my complaint. They took a detailed statement of my ongoing predicaments and ensured me utmost safety with reviving words of credence, which was nothing but the highest degree of protection for a stranded Indian student like me.
Mr.Pavol Prokopovič and Mrs. Maria Pavol, a compassionate couple decided to end my solitary living as they very kindly invited me to their celestial abode in France. They not only opened their house to me but also their hearts and I encountered their utmost benevolence and unconditional hospitality. I felt very secure after countless sleepless nights, their virtuous love made my heart rejoice.
In the words of the late legend, Justice V.R.Krishna Iyer, ‘humanism has many dimensions’ I have now understood that humanity is an ocean.  Sometimes ‘we have not… because we ask not and I witnessed the next phase of evolution where humankind switched from humans being kind!  Humanity has truly scratched the surface of its true potential in this deadly pandemic.  A disaster like the Covid-19 has united humanity cross-borders!  I owe my immeasurable gratitude to these God sent special angles for having assiduously assisted and supported me in times of this deadly crisis, each and every act was of effulgent articulation coated with sheer candour and docility.
Embarking upon a series of misfortunes and fortunes I am beholden to every official who protected me in times of this crisis.  After copious fretful days and worried weeks I am merry now with my Italian parents Mrs.Rosalinda Defrancesco and Mr.Caldarella Girolamo (amidst the disaster) and with immense humility, I render my heartfelt indebtedness to my family, friends, and members of KIRK for their unending moral support and especially to Mr. Rohan Issac Daniel for a priceless divine gesture, I am honor-bound.
(The author is Ms.Maffi, Advocate, she holds a degree in law from London, a Legum Magister in Legal Practice from the City University, UK, and a Legum Magister from United Nations Interregional Crime and Justice Research Institute, Italy )